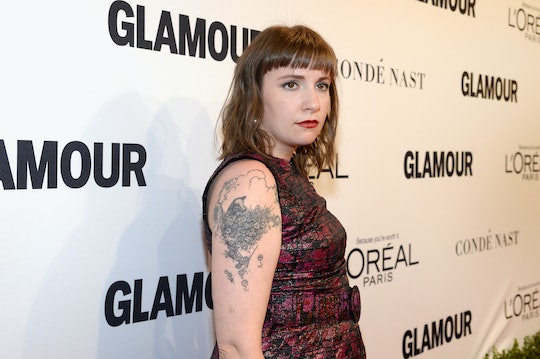 Lena Dunham has a unique ability to grab the country's attention with her provocative ideas, and by gum, she's done it again. According to People, during a recent podcast, the actress-writer-producer reminisced about how she once attached a stigma to abortion even as she fought for reproductive rights, leading her to say... wait for it... "I still haven’t had an abortion, but I wish I had." The tweets about Lena Dunham’s abortion comment are coming fast and furious, and while some are full of righteous indignation, others use humor to remind the star that hey, sometimes it's not about you, Lena, and that's OK.

Let's back up and see if her comment makes more sense in context, shall we? Dunham spoke of a trip she'd taken to a Texas Planned Parenthood, during which she was asked about her own experiences. She said that she was quick to point out that she'd never had an abortion herself, realizing that she "felt that it was important that people know that I was unblemished in this department." Great! It's important to examine your own biases and call yourself out on them. Learning and growing, people. But there's no need for the complete 180. Some Twitter responses have been thoughtful, some ugly, but I like the funny ones best.

My latest podcast episode was meant to tell a multifaceted story about reproductive choice in America, to explain the many reasons women do or don't choose to have children and what bodily autonomy really means. I'm so proud of the medley of voices in the episode. I truly hope a distasteful joke on my part won't diminish the amazing work of all the women who participated. My words were spoken from a sort of "delusional girl" persona I often inhabit, a girl who careens between wisdom and ignorance (that's what my TV show is too) and it didn't translate. That's my fault. I would never, ever intentionally trivialize the emotional and physical challenges of terminating a pregnancy. My only goal is to increase awareness and decrease stigma. I take reproductive choice in America more seriously than I take literally anything else, and therefore own full responsibility for any words I speak that don't convey this truth clearly. I know plenty of people will never like a thing that leaves my lips, mea culpas or no, but this apology is for the women who have placed their trust in me. You mean everything to me. My life is and always will be devoted to reproductive justice and freedom. You know how in some households you curse and have to put money in a jar? Well in mine, if you mess up your pro-choice messaging you have to give a sizable donation to abortion funds (https://abortionfunds.org/need-abortion) in New York, Texas and Ohio 💰I look forward to fighting with you all for the next four years and beyond.

A proper response at the time might have been something like, "Luckily, I haven't yet needed one, but I'll fight like hell for any woman who ever has, or ever will." A proper follow-up a year later might have been that, or even silence. Normalizing abortion comes from amplifying the stories of those who have actually had one, not those who are bummed that they haven't. I often argue for reproductive rights by claiming that nobody wants an abortion, but sometimes they're needed. Now, I'll have to come up with a whole new argument, because apparently one person does.

This isn't the first time Dunham has made the world gasp, roll their eyes, or do a cartoonish double-take. She's perhaps better known for her controversial statements than her good activism (of which there's actually a lot). It's hard to even call her comment polarizing, because both the pro- and anti-choice camps seem to be appalled by this one.

This really doesn't help the cause. Anti-abortion advocates are now reacting to Dunham's comment predictably, lamenting that all liberals want to kill babies. Dunham doesn't speak for all reproductive rights advocates (or even a handful, I'd wager), but to opponents, this is confirmation that they were right, and all feminists are monsters. Groups are often wrongly judged by using the example of their most vocal and headline-grabbing members. Just as most Muslims aren't terrorists and most Americans aren't Trump voters, most reproductive rights advocates aren't wishing for an abortion of their very own. Unfortunately, the noisiest one is, and it's casting a bad look on the rest.

But perhaps there is a silver lining to this mess. In a climate so embroiled in bitter debate that the internet is littered with articles explaining how to face your extended family after the election and think pieces on unfriending people on Facebook, there is one thing that we can all agree on: Dunham's comment isn't OK, because it ignores the circumstances of those women who might need to get abortions.