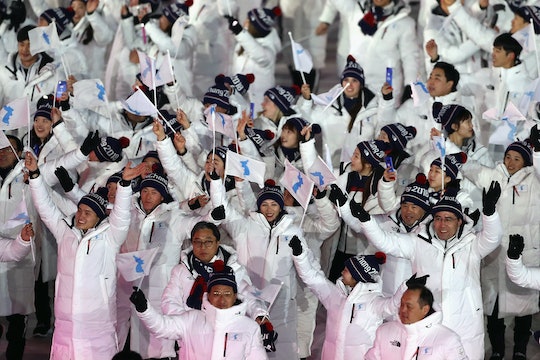 The Parade of Nations during the Olympics opening ceremonies has a way of making people feel a deep sense of unity and respect for the brilliant display of cultures from across the globe. There's something about the flags, bold colors, and culturally-related performances that just give viewers that warm, fuzzy feeling. There were even four Korean musical artists who sang a beautiful rendition of "Imagine." That's why tweets about North and South Korea walking together at the opening ceremony show what a big moment it was for everyone who had a chance to witness it.

Users immediately took to Twitter to weigh in on the sight of Koreans walking together in all-white snow suits and waving the Korean Unification flag, which "depicts a united Korean peninsula in a soft pastel blue against an expansive white background—a color motif that suggests peace and hope," according to The Atlantic.

Isabella excitedly tweeted: "Watching North Korea walking with South Korea at the Olympics made my day. SPORTS UNITE PEOPLE! #Olympics2018," while user Kira expressed a similar "TOGETHER" sentiment with her tweet. On the other hand, Twitter users like Carina were all "Hey, North Korea is scary as f*ck," but still felt inspired by it all. She tweeted: "North Korea scares the shit out of me, but the image of North and South delivering the torch together = ️️ #olympicOpeningCeremony."

But The Los Angeles Times reported the moment almost didn't happen. It wasn't until late January that North Korea was even cleared to participate in the games. It was during that very same meeting with the International Olympic Committee (IOC) that they approved a plan for both Koreas to march together under the Korean Unification Flag.

"The Olympic Games are always about building bridges. They never erect walls," IOC President Thomas Bach said, according to The Los Angeles Times. "The Olympic Winter Games PyeongChang 2018 are hopefully opening the door to a brighter future on the Korean peninsula and inviting the world to join in a celebration of hope."

But Twitter users pointed out that wasn't necessarily the case. Harrison tweeted: "If you watched the start of the #PyeongChang2018 Olympics, you might have seen South Korea and North Korea march together under a single flag and thought, 'Yay!'" But then followed up with several comments in which he explained, "The Peninsular Flag is friendly in appearance to the rest of the world, but it's a more complicated issue that caused some controversy here." The reason? Harrison says that while the flag indeed represents the unification of North and South Koreas, neither government will be willing to give up power for the idea to come into fruition.

The Atlantic noted more of the same, writing that the flag 'belies the heated controversy surrounding its use." In fact, South Korean conservatives have even criticized it for undermining South Korea’s big moment as host to the Olympics, the magazine noted.

The ultra-knowledgeable Harrison also pointed out that the attempt at a unified front isn't a first, "Also they've done this before. In 2000, 2004, and 2006 Olympics and even the 2002 Asian Games in Busan, South Korea. It's good but it's not new."

It turns out Harrison strikes again. Most recently Korean athletes walked together at the opening ceremony for the 2006 Turin Winter Olympics.

Other tweeters took a sarcastic approach to the effort, like Zach, who tweeted: "[sees North Korea walking with South Korea during #OpeningCeremony]

Whether you stand on the side who calls bullsh*t on the message of solidarity or see it as an inspiring message, it's totally OK to hope the display sets a positive tone for the games.