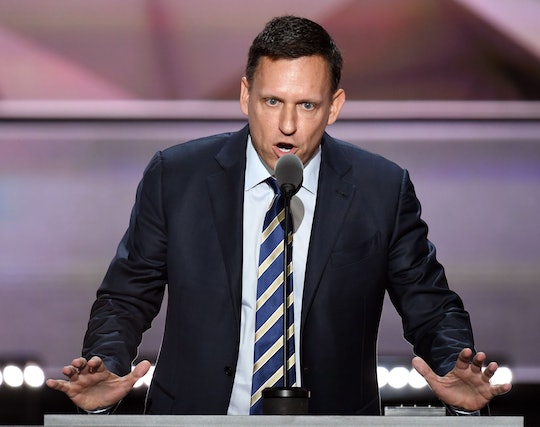 Tweets About Peter Thiel’s Eyebrows Are Hilariously On Point

On the final night of the Republican National Convention, Peter Thiel, an openly gay businessman, warmed up the crowds to welcome Republican presidential nominee to the stage Donald Trump. Thiel’s appearance at the Republican convention was not only a surprise to viewers as he was one of the most unlikely supporters to back Trump, but something seemed a bit off or missing altogether — and Twitter definitely noticed. These tweets about Peter Thiel’s eyebrows are simply hilarious and prove that, exhausted as they are, voters are still ready to have some fun.

For those outside the tech and business world, Thiel's name is possibly most noticeably for his appearance the 2010 Hollywood take on the inception of Facebook in The Social Network. His character makes a brief appearance as he writes Mark Zuckerberg a $500,000 check to invest in the company and suggests he betray his best friend and Facebook co-founder, Eduardo Saverin.

Thiel's speech, like Trump's, had been boasted as one of the can't miss speeches from the convention because even though both men stand on very different sides of specific issues, but because Thiel is also a billionaire investor and he's Trump's main connection to Silicon Valley. Even more, Trump is hasn't been a favorite in the tech bubble and Thiel was the first openly gay man to speak at the RNC since 2000.

There were plenty of reasons to tune in for Thiel's appearance, but Twitter wasn't expecting the other billionaire's eyebrows to be the topic of discussion.

One topic that viewers expected Thiel to address was the heated debate on gender neutral/ transgender bathrooms, which he called a "distraction."

"When I was a kid, the great debate was about how to defeat the Soviet Union. And we won," Thiel said during his speech on Thursday night. "Now we are told that the great debate is about who gets to use which bathroom. This is a distraction from our real problems. Who cares?"

Some thought his speech was still great despite the fact he passed by this issue, but others were outraged that missed an opportunity to speak on an important bill that needs attention.

"I am proud to be gay. I am proud to be a Republican. But most of all I am proud to be an American," Thiel said. "I don't pretend to agree with every plank in our party's platform. But fake culture wars only distract us from our economic decline. And nobody in this race is being honest about it except Donald Trump."

More Like This
20 Amazing Shows With LGBTQ+ Characters To Watch With Your Kids
13 Celebrity Parents Who Also Raise Chickens At Home
Jennifer Lawrence Just Kinda, Sorta Revealed The Sex Of Her First Baby
19 Children & 2 Adults Killed In Mass Shooting At Texas Elementary School