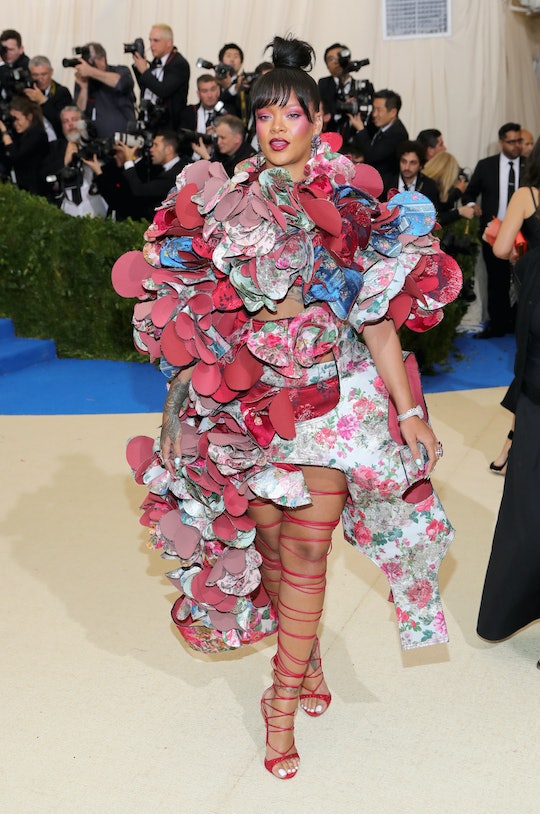 This year's Met Gala did not disappoint. Celebs took to the red carpet on Monday evening looking absolutely flawless in their ensembles, and while some went with a simple style (ahem, Kim Kardashian), others opted for over-the-top ensembles to match this year's theme, "Rei Kawakubo/Comme des Garçons: Art of the In-Between." It was obvious that not everyone was ready to dive right into the out-the-box trend — but one star definitely seemed more than eager to jump on board. In fact, these tweets about Rihanna's Met Gala dress prove that her look not only complemented the theme to a T — it also proved that she had come to slay once again, and she wasn't messing around.

Rihanna went all out for the Met Gala this year in an extravagant, multi-colored structured gown designed by the evening's honoree, Japanese fashion designer Rei Kawakubo, who is known for “her avant-garde designs and ability to challenge conventional notions of beauty, good taste, and fashionability,” according to the Metropolitan Museum of Art's website. And Ri Ri's look totally fit this vision.

The petals of floral fabric wrapped around the 29-year-old singer weren't the only head-turning parts of her look. People also could not stop talking about her red gladiator heels that wrapped all the up her thighs along with her complimentary, colorful make-up and a top knot with sleek bangs.

Twitter users, of course, could not get over how beautifully Rihanna slayed this year's theme and quickly shared their deep appreciation for her commitment to the look:

And it wasn't the first time she knew what she was doing at the Met Gala. According to Vogue, Rihanna actually has a long history of owning these red carpets and celebrating the themes, which also did not go unnoticed on Twitter:

But, as per usual, some found opportunities to crack a few jokes about her jaw-dropping ensemble:

All jokes aside, Rihanna's look was "a full-on fashion fantasy" and "an architectural wonder," as Vogue described the dress, which was straight off the Fall 2016 runway. It was clear from the moment that she stepped on the red carpet that she stole the show at this year's Met Gala.

Ri Ri is known to push the boundaries, whether it's visually in her music videos or creatively with her fashion choices. And tonight's look was no exception. Rihanna didn't have to work, work, work for the best-dressed title at Monday's coveted event, because she claimed it before it even started.