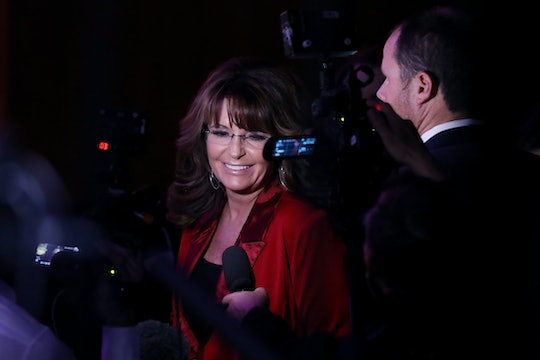 Sarah Palin, Kid Rock, and Ted Nugent walk into the White House ... No, that's not a set-up to a bad joke. That actually happened on Wednesday night. The former governor of Alaska and her conservative hard rock pals headed down to Washington, D.C. Wednesday for hang out with President Donald Trump. As should be expected, their visit had social meda reeling. Just check out some of these tweets about Sarah Palin, Kid Rock, and Ted Nugent visiting the White House that pull no punches.

According to the New York Daily News, Trump invited Palin, Nugent, and Kid Rock to the White House to give them a formal tour of the presidential mansion (Nugent and Kid Rock also brought their wives). Photos of their Wednesday night visit circulated on social media. In one photo, Kid Rock, Nugent, and the GOP 2008 vice presidential candidate are seen looking over Trump's shoulder at papers. In another shoot, the three ardent Trump supporters stand mockingly in front of a portrait of Hillary Clinton — the only person in the photo, by the way, who actually had a role in the White House.

Palin and Nugent took to Facebook to brag about their White House visit and meeting with Trump, according to the Daily News. Twitter, on the other hand, had different ideas.

People also took the time to remind others of Ted Nugent's atrocious history of racism, misogyny, and antisemitism. In April 2012, Nugent, a devout member of the National Rifle Association, made a threat against former President Barack Obama's life, according to The Atlantic. (Though largely considered a figurative threat, the Secret Service nonetheless opened an investigation into his statement.) Two years later, he called Obama a "subhuman mongrel" — a racist slur for multiracial people originating with the Ku Klux Klan — according to the New Yorker.

In 2016, he wrote on Facebook that Obama is "evil man" who wants to start "a racewar [sic]," Media Matters reported. And that same year, Nugent posted an antisemitic meme to Facebook targeting Jewish supporters of gun control — a post for which he apologized, according to the New York Daily News.

Of course, that's not all the gun-toting singer has done. BuzzFeed put together a top 10 list of Nugent's most awful moments back in April 2012. Among them, using a bond-and-gagged woman as the cover of his greatest hits album and saying fans of the Grateful Dead should be jailed and raped in prison.

Never mind that, back in 1978, a 30-year-old Nugent became the legal guardian of his 17-year-old girlfriend because she wasn't old enough to marry, according to the Houston Press. And the lyrics to his 1981 song "Jailbait" are about preying on a 13-year-old girl; again, Nugent was in his 30s when the song was released.

But — and it's a big "but" — the people Trump invites into America's home is directly reflective of his values as a person and as a president. Palin, Kid Rock, and Nugent's presence at the White House reinforces that Trump is here for only one kind of people.