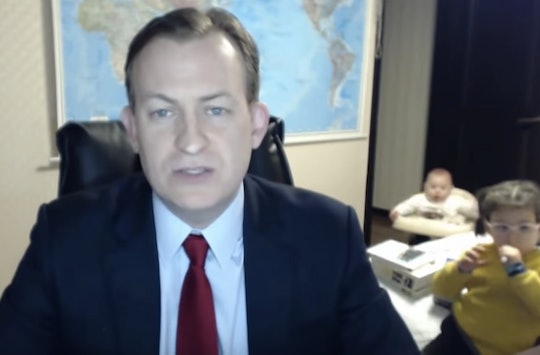 Tweets About The BBC Dad Show He's So Relatable

For one dad, bring your daughter to work day came a bit early. An expert being featured on BBC had some adorable visitors in the middle of his segment: his children. Here are some Tweets about BBC Dad, who is now pretty famous.

On Friday, Professor Robert Kelly, a political science professor at Pusan National University in South Korea, was doing an interview on BBC about the impeachment of South Korean President Park Geun-hye, The Washington Post reported.

But when Kelly was asked what the impeachment will mean beyond South Korea, that's when something unexpected happens: his daughter enters the room. Or more accurately, bounces into the room (in an adorable yellow sweater!). Another baby then rolls in — this one in a baby bouncer. Kelly laughs and apologizes when his wife comes to take the kids out of the room (and knocks over a book in the process). Even after she shuts the door, you can still hear one of the kids crying, while Kelly gives a composed answer to the interviewer's question.

The video is super cute, and has gone viral on social media. Here are some funny Tweets about Kelly's segment, who is now being called "BBC dad."

But some of the Tweets make important points about why this video has gone viral. A few people mentioned that we'd be judging and writing thinkpieces about the incident if BBC Dad had been BBC Mom, especially if a mom in that situation chose not to pick her kids up as Kelly did. One person even wrote that he wished Kelly had picked his daughter up to set an example for working dads everywhere:

Another person made a valid point that it says a lot that social media users paid more attention to this cute video than to President Park Geun-hye's impeachment.

No matter where you stand on BBC, we all can relate to Kelly in this moment. Any parent would have the same look that flashed in Kelly's eyes when he realized his daughter interrupted him doing his job... on live television. He gets major kudos for managing to thoughtfully respond about a serious topic after such a light moment.

And don't feel too bad for Kelly: the reason his segment has gotten so much attention is because of his kids. I wish they would have crashed that boring economics class I had in high school. That would have made things a lot more fun.

More Like This
Prince Harry & Meghan Markle Thank Elton John For Being A Friend To Archie & Lilibet
Ryan Reynolds Was Asked If He's Excited To Be A Dad Of 4 & Obviously Cracked A Joke
Exclusive: 'Firebuds' Dives Into Hanukkah Traditions In Festive New Episode
Meghan Markle Spent Her Thanksgiving Volunteering For A Cause Close To Her Heart