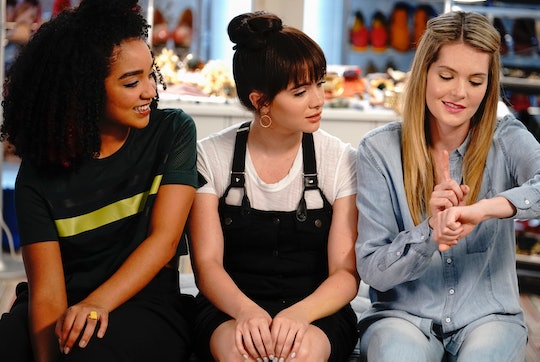 In just a few seasons, the women of The Bold Type have become beloved characters — and fans want to know how they got where they are. The May 14 episode the show is titled "#TBT" and takes viewers back to the day Jane, Kat, and Sutton first met, and there are fan tweets about The Bold Type that prove they are just as excited to watch Scarlet's fearless trio meet as I am.

Before I give you proof, here's a little bit of context for what's going on. Scarlet magazine has been hacked, and that means, well, everyone's emails will be public and it's going to be a nightmare. Think about it. Can you say for sure you would be safe from all consequences if your work email was hacked and made public? Even if you love your boss you probably sympathetically agreed with a coworker's venting or at least once made a snarky comment.

At Scarlet, the staff will face different levels of consequences. Oliver, for example, knows that he loves snark so much he probably needs to apologize to all of Manhattan. Jane promised anonymity to a model who was abused by one of the most famous photographers in the fashion industry. If her identity is revealed, her entire career is in jeopardy. And Jacqueline has at least one big secret on the line. She has ten years at Scarlet under her belt, how could she not have something to hide?

I'm not going to lie, I'm nervous to see this play out. The last thing Jacqueline needs is to give Patrick Duchand (Peter Vack) a reason to come for her job. But I also love a good flashback episode and I'm dying to see baby Jane, Kat, and Sutton meet. Fans are just as excited as I am, and there are tweets to prove it.

Some already know it will be their favorite episode of the series.

Others have even bigger expectations for the episode. If any show can heal your Game Of Thrones feels, I have faith that The Bold Type is up to the challenge.

Most people just know what a gift the show is and are ready to travel back in time to the very beginning of the girls' careers.

People are even posting throwbacks of themselves from 2014 to commemorate the occasion. But you know an episode is going to be really good when the staff seems as excited as fans are for the episode to air. So The Bold Type writer Amy-Jo Perry's tweets are really getting me pumped.

What's better than an episode of TV that inspires you to quote Oprah? I can't think of anything, so that must mean that nothing better exists, right?

Hacks have serious consequences and the entire staff has to put hard feelings aside to come up with a solution (and probably help Jacqueline) to their collective problem. It's not going to be easy, but here's hoping everyone in the present survives the episode unscathed. My computer's fine so I'm just going to grab snacks and watch it all go down.