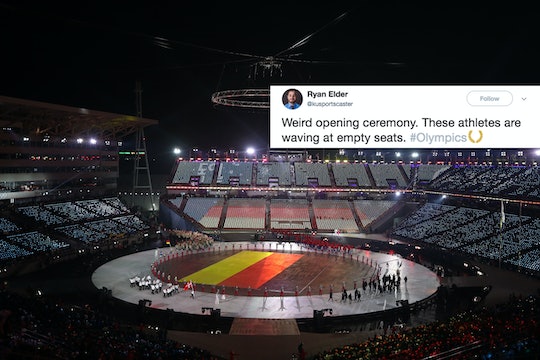 The 2018 PyeongChang opening ceremony brought the lights, vivid colors, and bold outfit choices during the Parade of Nations. But a quick pan of the audience showed some smiling faces in the midst of illuminated seats that were, well, empty. "Where are all of the people?" my husband said. And it turns out Twitter noticed too. In fact, tweets about the empty seats at the opening ceremony prove people are really worried about the attendance.

After all, they created quite the optical illusion by seemingly "filling" the seats with flashes of red, blue, green, and other colors. It made it appear as though the stadium was packed. But at second glance, people began to notice that beyond those lights was, well, not a person. Viewers immediately took to Twitter with users asking all of the questions about the seats, like who will be sitting there and will anyone ever sit there? User @lds_15 even used a lot of question marks to express her concern. She tweeted: "Are the seats at the Opening Ceremony for the Olympics empty?!?!?!? What???" Steve wondered something similar, tweeting, "Is it me or does it look like there are a ton of empty seats at the Opening Ceremonies? #WinterOlympics2018#Olympics#OpeningCeremony." While Brooke and other people offered a decisive, "How sad is that?"

Of course, the tweets are simply mirroring what several reports had already said was a concern about low attendance for the PyeongChang games. According to a December report by Forbes, the most updated figures reflected that around 330,000 tickets had sold "or, a paltry 30 percent of the targeted 1.1 million tickets." The article noted two of the top reasons ticket sales could be an issue were the idea that Korea is "not worth the trip," as well as nuclear fears related to North Korea.

But several Twitter users were quick to jump in line to explain away the empty seats, many of them, like Evan, claiming that they were simply vacant spots where the athletes would sit following their stint in the Parade of Nations. Sarah even went so far as to use all caps in her tweet: "PUBLIC SERVICE ANNOUNCEMENT: The empty seats are for the ATHLETES. #OpeningCeremony."

Type "empty seats" into your Twitter search bar and you'll find people are still going back and forth on the issue. But my personal favorite is Cowgirl Kate (whose name really says it all, am I right?) who reflected on the Americans' entrance to "Gangnam Style" and tweeted: "Looks like a bunch of empty seats were invited to the Opening Ceremonies. Of course, if I had known Gangnam Style was running on a continuous loop, I wouldn’t be there either."

I mean, she's not wrong.

Of course, then there is those who tried to give an explanation for why no one was in the seats, missing the mark completely.

Which is a valiant effort, but perhaps a tad off the mark given that these athletes perform in the snow and ice, and the opening ceremony is kind of an honor to witness and all that jazz. But, Ellie, you da best anyway.

The empty seats seem to be the spots where the athletes are intended to sit, but who knows just how full that stadium got during the opening ceremony? There are still plenty of events to see and I'm sure there will be plenty of people in attendance.