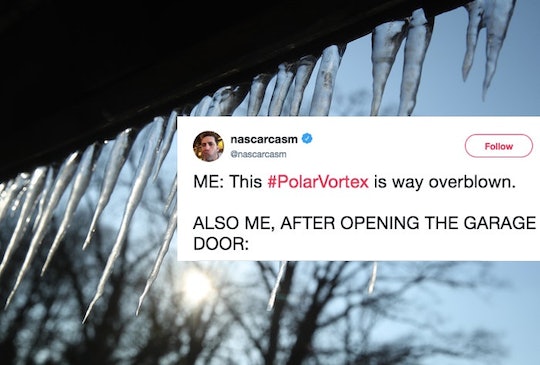 The Polar Vortex Is Here, So Please Stay Warm & Enjoy These Hilarious Tweets

Anyone who is currently in the midwestern region of the United States knows one thing to be true: It is unseasonably and unreasonably cold outside. Certain parts of the country are currently in a polar vortex and experiencing what some people are calling an arctic blast of frigidly cold air. There are so many ways that people are dealing with this freezing weather, but these tweets about the polar vortex show that, sometimes, humor can be the best way to cope with this cold, cold pain.

One of the coldest arctic air masses in recent history hit the United States earlier this week, according to NPR, impacting most of the midwest and eastern states in the nation. With most states and cities experiencing record lows (and temperature highs in the negatives) this arctic blast is being labeled as incredibly dangerous, for a good reason. Spending too much time outside can cause people to get sick, become injured, or get stuck somewhere without any possibility of refuge, according to The Weather Channel.

But sometimes, the best way for people to deal with such a terrifying situation is to make jokes about it. And while these tweets show this polar vortex is indeed serious, they're also taking the opportunity to stay indoors with some humor.

All jokes aside, the polar vortex is just as scary as it sounds. A vortex, at its core, is a "circulation of strong, upper-level winds, that normally surround the north pole," according to CNN. But there are occasions in which these winds will "dip" much further south, which is why these bone chilling winds are currently in the midwest.

The last polar vortex occurred in 2014, which makes it pretty rare. Therefore, people have every right to complain and vent about this bitter cold.

Even dogs are suffering from the vortex, too. While they might look so cute all bundled up, they don't enjoy being outdoors in this cold weather, just like their owners.

Life has pretty much come to a standstill in these areas affected by the blast. The postal service has suspended mail delivery in certain states, flights have been canceled, and multiple schools have cancelled classes because it's too dangerous to walk outside, according to ABC News. People in these states are being advised to stay indoors, according to NPR, because of how dangerous it is outside.

And it's not just the midwest that is experiencing the worst of this. People in states all across the nation (and even the east coast) are feeling the brunt of this cold weather. Needless to say, winter is far from over.

But people are making the best of their time during this polar vortex.

Although it might seem like this cold weather is never ending, there is some good news on the horizon. The arctic blast is only expected to last a day or two in certain locations, according to The Weather Channel, and temperatures are expected to rise up to the 40s by this weekend in the midwest, according to ABC News.

While people are probably rejoicing that this vortex won't last forever, they're certainly making the most of this arctic weather right now.