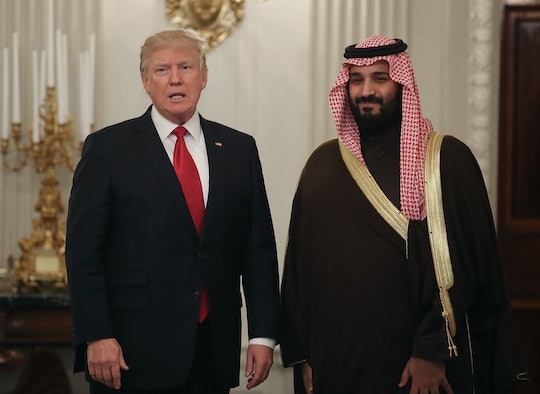 At this point, President Donald Trump's presidency is essentially a parody of itself, and perhaps none of his insane antics, potentially catastrophic policy decisions, or myriad scandals has illustrated that point more starkly than his trip to Saudi Arabia. He jetted off on his first international trip as president amid intensifying (mostly liberal) speculation that he could face impeachment for his campaign's alleged ties to the Russian government and the ensuing scandals, and touched down in the Middle Eastern nation to a series of controversies generated by his own hypocrisy. As is often the case with Trump, much of the brouhaha stems from his own Twitter feed — so, plenty of tweets about Trump in Saudi Arabia that prove he's in way over his head were written by the president himself.

Trump, who once called for a ban on Muslims entering the United States and who has attempted to make good on that promise, opted to make the majority-Muslim Saudi Arabia his first stop abroad as president. It's just another confounding choice of an unpredictable, sometimes reckless individual, but it's just the start of the cascade of apparent contradictions that are oozing from the trip's every metaphorical pore. So, here's a (most likely non-exhaustive) accounting of all the times that Trump has put his ignorance on display via Twitter as it pertains to his Saudi Arabia trip.

Trump — as well as the conservative media — pilloried former President Barack Obama when he bowed to Saudi Arabia's King Abdullah in greeting in 2009. In 2011, he used Twitter to accuse the then-president of practicing "'pretty please' diplomacy" based in part on the bow (which Obama's White House denied). "He begs and pleads and bows," he tweeted at the time. And then, the next year, he was at it again. ".@BarackObama bowed to the Saudi King in public — yet the Dems are questioning @MittRomney's diplomatic skills," Trump tweeted in 2012, taking an obvious shot at Obama in defense of his opponent for the nation's top job that year, Mitt Romney.

But soon after he arrived in the country himself, Trump appeared to also "bow" to King Abdullah's successor, King Salman, as he placed the honorary collar of Saudi Arabia's founder around his neck.

On the other hand, some Trump supporters insisted that he was simply bending over to receive the medal. Still, he wasn't off to a great start.

Never one to miss a chance to criticize, Trump blasted then-First Lady Michelle Obama's decision not to wear a headscarf when she visited Saudi Arabia. "Many people are saying it was wonderful that Mrs. Obama refused to wear a scarf in Saudi Arabia, but they were insulted," he tweeted in 2015. "We have enuf enemies."

But can you guess who also decided against donning the headscarf during this presidential trip to Saudi Arabia? That would be both the president's wife and daughter. Somehow, I don't think they'll find themselves on the receiving end of any nasty Trump tweets for this "transgression" he once considered so dire.

To Accept The Money... Or Not?

While Trump is in Saudi Arabia, news broke that the country's government, along with that of the United Arab Emirates, have promised to contribute $100 million to a ethically questionable proposed World Bank’s Women Entrepreneurs Fund initiative, which was proposed by Ivanka Trump, according to ThinkProgress. Kind of like how Saudi Arabia donated between $10 and $25 million to The Clinton Foundation — money he criticized his presidential opponent Hillary Clinton for accepting during a debate last year:

You talk about women and women’s rights. These are people that push gays off business  —  off buildings. These are people that kill women and treat women horribly, and yet you take their money. So I'd like to ask you right now. Why don’t you give back the money that you’ve taken from certain countries that treat certain groups of people so horribly? Why don't you give back the money. I think it would be a great gesture.

Why Not Say "Radical Islamic Terrorism"?

Trump has publicly interpreted Obama's refusal to use the term "radical Islamic terrorism" to refer to acts of terrorism committed by people who are Muslims as a sign of weakness or indication that he sympathizes with terrorist groups like ISIS. But when Trump gave his big speech on Islam in Saudi Arabia Sunday? He didn't mention the phrase once. Hmmm.

Trump will be traveling throughout next week, hitting major cities like Tel Aviv, Vatican City, and Brussels. If his first few months as president is any indication, controversy and absurdity are sure to crop up wherever he goes.