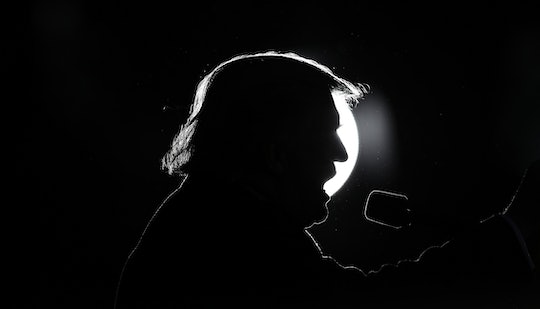 When Trump won the 2016 election, some mused that perhaps the stars had aligned in just the right way to allow his unexpected and surprising victory. Now, just 287 days since Election Day, the stars will actually align — well, at least one star, the sun — and there are plenty wondering on Twitter just what Monday's solar eclipse could mean for President Trump. Tweets about Trump and the solar eclipse show that the two topics have been inseparably linked, between savage puns, astrological predictions, and even some well-deserved criticism about the administration's anti-science stance.

While Trump himself has not yet tweeted about the upcoming solar eclipse, the path of totality does run through "Trump country," as The Boston Globe pointed out earlier this month. The solar eclipse is expected to be at 81.1 percent totality in Washington, D.C., according to Vox. According to the president's official schedule as compiled by Factba.se, Trump is scheduled for a meeting with Sec. of State Rex Tillerson at 1:30 p.m. Eastern Time in the Oval Office, and then a swearing in ceremony at 4 p.m. CNN reported that Trump will watch the eclipse from the Truman Balcony. Who's ready for those tweets from the president? I know I am!

Here's what Twitter has to say about Trump and the solar eclipse so far.

With so much focus on the sun, Trump is ripe for some seriously sick burns related to the solar eclipse. Here are some of the best ways people are throwing shade at the president on Twitter.

From Spicey to the Mooch to Steve "Watch The World Burn" Bannon, it's true that the solar eclipse is also fleeting.

All Of The Puns

The metaphors, similes, and puns were flying fast and loose on Twitter Monday afternoon.

Solar eclipse puns about Trump are definitely at 100 percent totality.

An Omen In The Sky

Others saw the moon's shadow blotting out the sun as something more than metaphor, and maybe a of sign of something more sinister — this whole Twitter thread about is a trippy contemplation about the eclipse in the age of Trump.

One Twitter user pointed out how eerily similar Monday's confluence of events feel like the plot of OMEN III.

Oh Julia, that would be super rad, if Trump has some kind of Nirvana-like revelation and becomes the leader our country so desperately needs right now — but I have a feeling that's an almost too high pie in the sky wish for Monday's eclipse. We'll just have to wait and see.