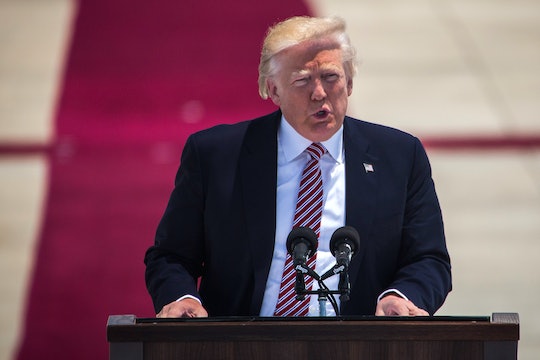 We all know that President Donald Trump is a huge fan of walls. So perhaps it's not surprising that, on Monday, he became the first sitting president to make a visit to one of the most tremendous walls out there, the Western Wall in Jerusalem. It's one of Judaism's holiest sites, but the tweets about Trump and the Western Wall that popped up in response to the visit veered much more toward the darkly comedic than to the reverent.

Trump made the historic visit on his first foreign trip, after visiting Saudi Arabia and before heading over to the Vatican to say hello to Pope Francis. During the visit, which he called "a great honor," he donned the traditional yarmulke, and was accompanied by first lady Melania Trump, first daughter Ivanka Trump, and son-in-law Jared Kushner. He also put a note into one of the many cracks in the wall. It's a tradition for visitors to write prayers and hopes on notes, and leave them inside the wall. When the wall gets too full, the notes are collected and buried on Jerusalem's Mount of Olives.

After reporters and photographers captured Trump tucking his note inside a crevice, many on social media immediately began imagining what he might have written on it. What does Donald Trump wish for? What does he want to communicate to God? Some commenters had less-than-holy ideas about what Trump might have said:

We'll probably never know for sure what Trump wrote, although when President Barack Obama visited the wall as a candidate in 2008, someone stole his note, and leaked it to the press. That note read,

Lord, Protect my family and me. Forgive me my sins and help me guard against pride and despair. Give me the wisdom to do what is right and just. And make me an instrument of your will.

Others on social media were quick to point out that Trump may have been sizing up the Western Wall, and comparing it to that dream Mexico border wall on which he ran his campaign. That wall has run up against the tricky issue of funding, since Mexico has made clear that it is not going to pay for it.

And still others took the opportunity of Trump's holy wall-touching to bring back up those infamous Access Hollywood tapes regarding Trump's treatment of women, in which the president bragged about a very different kind of touching.

Thank goodness for Twitter, and its ability to provide a good laugh in a world that seems to get ever-crazier.