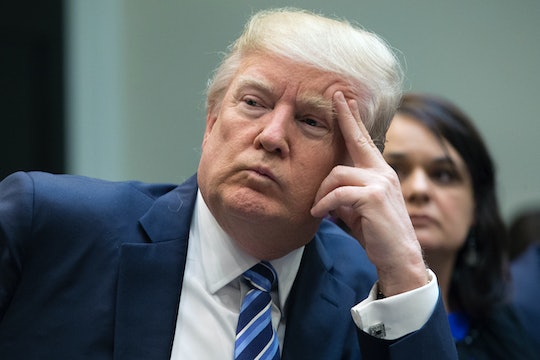 Rachel Maddow dropped a bombshell on Tuesday night when she tweeted that she'd gotten a hold of President Donald Trump's elusive tax returns. Of course, the internet immediately went nuts. And despite Trump having previously claimed that no one cared about seeing his returns anyway, these tweets about Trump's tax returns prove that people do indeed care. And they care a lot.

Maddow tweeted the news that broke the internet on Tuesday night, saying, "BREAKING: We've got Trump tax returns. Tonight, 9pm ET. MSNBC.(Seriously)." As people proceeded to freak out, she clarified that they had obtained his 1040 form from 2005. Trump's returns were a big issue throughout the presidential campaign, as he broke with years of election tax return precedent by refusing to release them. At the time, he claimed that he could not release his returns because he was being audited by the IRS, although the IRS said that he could absolutely release his tax returns anyway.

The White House wasted no time in responding to Maddow's tweet. Jennifer Ablan, the editor-in-charge of U.S. Investments at Reuters, tweeted, "14-Mar-2017 08:29:23 PM - WHITE HOUSE SAYS IN RESPONSE TO MSNBC THAT TRUMP PAID $38 MILLION IN TAXES ON INCOME OF $150 MILLION." A later statement from the White House claimed the leak and subsequent reports were "illegal" as well (they aren't).

Maddow began her show by describing the many important reasons for Trump to make his tax returns public, from reasons of national security (it's important to confirm that the president is not beholden to any foreign interest) to the simple desire to confirm whether or not he is actually as rich as he says he is, given that he has built his entire image and empire around being a wildly successful businessman.

Many online braced themselves for a big revelation of some kind. After all, when someone breaks precedent not to release information, it's pretty easy to assume that such information has something damning in it.

However, it became clear that the two pages of tax returns Maddow had obtained did not contain any bombshell information, revealing that Trump paid around $38 million in taxes that year (which the White House had confirmed moments earlier). Maddow's guest, David Cay Johnston, the reporter who received the returns, even suggested that Trump himself may have leaked them because they were relatively non-damning. The Twitter reaction soon turned mostly to disappointment, after all the earlier anticipation — most likely due to the largely tame content therein:

Still, although the breaking news that nearly broke Twitter turned out not to be the big reveal that many were hoping for, it did bring the issue of Trump's tax returns into the limelight again. Perhaps this is only the beginning.