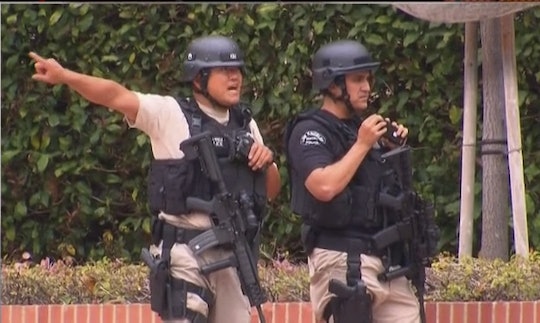 Police swarmed the campus at the University of California, Los Angeles on Wednesday, after two men were shot dead in a murder-suicide in the school's engineering building. Police did not reveal the motive for the shooting. Terrified students hid under desks and protected themselves with makeshift barricades for nearly two hours as police scoured the campus. The area was declared safe at 12:30 pm local time, but tweets from the UCLA shooting showed just how terrifying and confusing the situation really was.

As armed SWAT officers searched the university for signs of the shooter, students filed outside the school with their hands up, knelt to the ground and were searched by police.

The university sent out a text message and email alert to students around 10 am local time informing them of a shooting in the school's Engineering 4 building and urging them to lock down in a secure location.

“Immediately we barricaded the doors, blocked openings with trash cans, turned off the lights, and pulled down the blinds,” Melanie Beecher, a first-year student, told the The New York Times

Students hiding in classrooms without locks blocked the entrance with chairs and projectors and tied doors shut with belts and cords. The shooting happened the week before final exams and graduation on the 43,000-student campus in Los Angeles.

Several tweets detailed the terrifying scene as it unfolded:

Students received text messages and emails with this alert shortly after 10 am local time:

Armed police officers searched the hallways for the suspect

Terrified students stuck in engineering classrooms with no locks did what engineers do best: They created their own mechanism using the materials they had on hand, including belts...

A gun was found at the scene of the crime and police said there is a possible suicide note. Classes and events were canceled for the day but will resume tomorrow. The shooting will not affect finals scheduled for next week nor the school's graduation on Friday.