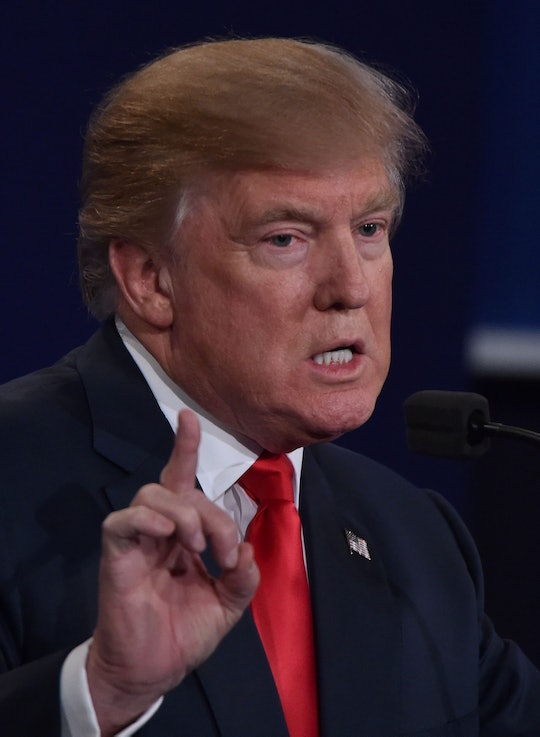 On Wednesday night's final presidential debate, Donald Trump started off fairly strong for being Donald Trump. He didn't sniff for at least 30 minutes. Eventually, though, and inevitably, he descended right back into classic Trump, including his childish and misogynistic interruptions. One of the internet's favorites was when he called Hillary Clinton a puppet, then she called him the real puppet and he responded by muttering "No, you're the puppet," as she was speaking. Tweets and memes about Trump's puppet quote show that it did not go unnoticed, and was the ultimate "I know you are but what am I?" response.

Many people wondered whether we actually had a five-year-old running for president, as Anderson Cooper himself once wondered (remember when Trump's only argument was "She started it"?). Luckily, we have the internet to make us all laugh hysterically when we really want to cry that this man is a literal candidate for President of the United States. The puppet jokes are just so easy that they practically write themselves, and Twitter had an actual field day with them. So I've rounded up some of the best memes and tweets following Trump's playground "I'm rubber and you're glue" style puppet taunt.

Perhaps unfortunately for him, Trump's actual message got a little bit lost in his delivery, which is so quintessentially Donal Trump. His habit of interrupting with downright childish insults and stubborn refusal to accept anything gracefully basically encapsulates many of the criticisms against him (that and the bigotry and the violence incentivizing, and the sexual assault and his lack of even the most basic policy knowledge). It's the reason the audience laughed out loud when he said his greatest strength was his temperament at the first debate. And it was hardly the only instance in which he interrupted Clinton as she spoke at this debate. He fell back on his habit of barking "wrong" into the microphone at every criticism, even when what she was saying was demonstrably right.

Luckily, the election is almost over. In the meantime, enjoy these memes of Putin playing with his Donald Trump puppet.