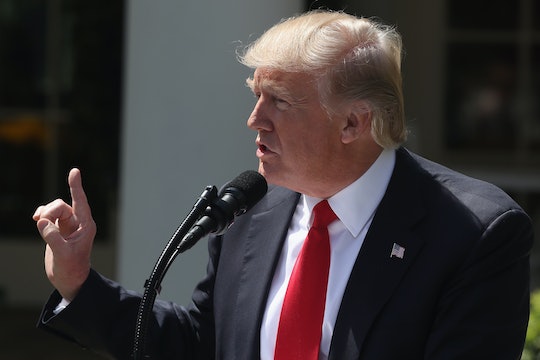 On Thursday, President Donald Trump addressed the American people after the United States military launched a missile attack on an airbase near Homs in Syria. According to The New York Times, the launch was in response to the Syrian government's deadly chemical weapons attack that killed more than 80 civilians. Trump addressed the attack and the death toll as a "horror," leading some lawmakers to praise Trump's action against Assad (while also pointing out there is a congressional approval one must follow while going forward with such orders), while others took to Twitter to point out the hypocrisy with the Syrian missile launch and the refugee crisis the country faces.

Trump's statement regarding the missile launch was made at his Mar-a-Lago estate in Florida, where he is currently meeting with the Chinese president. His statement focused on the dozens of lives lost in the chemical attack, also noting that the attack violated "obligations under the chemical weapons convention," as well:

On Tuesday, Syrian dictator Bashar al-Assad launched a horrible chemical weapons attack on innocent civilians. Using a deadly nerve agent, Assad choked out the lives of helpless men, women and children. It was a slow and brutal death for so many. Even beautiful babies were cruelly murdered in this very barbaric attack.

No child of God should ever suffer such horror.

Tonight, I ordered a targeted military strike on the airfield in Syria from where the chemical attack was launched. It is in this vital national security interest of the United States to prevent and deter the spread and use of deadly chemical weapons.

There can be no dispute that Syria used banned chemical weapons, violated its obligations under the chemical weapons convention, and ignored the urging of the UN Security Council. Years of previous attempts at changing Assad's behavior have all failed, and failed very dramatically.

Something that many Twitter users were quick to notice, though, was the glaring hypocrisy that the statement carried. Although Trump delivered concern for all those affected by the Syrian chemical attack on Thursday night, he has built his presidency on the fact that he does not want the United States to welcome Syrian refugees beyond its borders.

Just days into his presidency, Trump put a refugee ban — which became known as a travel ban — into place that blocked Syrian refugees from entering the United States. Syria was one of seven countries that was banned at that time. When that executive order was stopped, the president proposed another executive order about a month later — this time, changing a few things from the original ban, but still including six Muslim-majority countries' citizens from being barred from entering the United States. Syria was still one of those countries.

Of course, the statement Trump released falls flat when his concern seems to stop when it comes to actually welcoming the "beautiful" civilians into his own country.

Some users are calling for the president to find some compassion in his own statements.

Ultimately, the question has to be raised: If Trump is so concerned about the Syrian citizens, would it be out of line with his stated beliefs to accept some of the refugees into the United States?