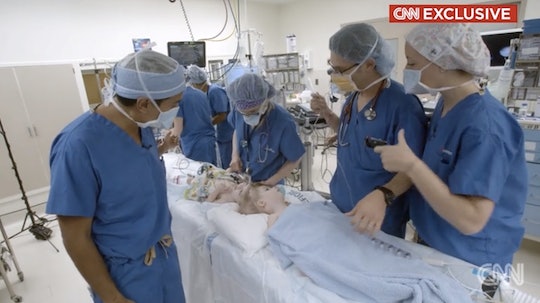 After thirteen months together, Jadon and Anias McDonald underwent necessary, life-changing surgery. The twins, once conjoined at the head, have had one of the fastest post-surgery recovery times ever, and their parents couldn't be more elated. At six weeks post-op, the McDonald boys have beaten the previous record for the fastest recovery time after the separation of craniopagus twins, which was about eight weeks.

The 27-hour operation at Montefiore Hospital in New York turned out for the best. The lead surgeon for the procedure, Dr. James Goodrich, made note of the impressive outcome, saying: "Historically, this will be the fastest [recovery]," and that the record-making time was due to the fact that Jadon and Anais are "just good kids." "When they're ahead of schedule," Goodrich notes, "it makes everyone happy."

But that isn't to say that every aspect of the surgery went smoothly. In fact, there was a moment when Goodrich contemplated halting the surgery altogether. He told CNN, "I was afraid by clamping those veins, if any one of them ruptured, that's how you lose a child." Luckily, though, he found a work-around and was able to carry on despite "the boys' blood vessels [being] so intricately tied together."

Nicole McDonald, mother of the twins, notes that, though successful, the recovery has not been perfect. Thus far, each twin has had at least one seizure. Dominant twin Jadon, though, has managed to regain use of his left side, even to the point of being able to grab things. Anais, who's had a more difficult recovery as the non-dominant twin, has been subject to "frequent fevers, vomiting and bacterial infections." His full recovery is expected to take a bit longer than Jadon's, as he'll be needing a new skull cap years from now.

Nicole has been sharing twin updates on her Facebook page since the very beginning, writing statuses on everything from surgical procedures to day-to-day evaluations of the boys to, understandably, moments of gratitude post-surgery. Though months of therapy await the twins, followed by years of check-ups and assessments, for now, she's celebrating. On Tuesday night, Nicole posted:

It's only up from here. :) How appropriate that Thanksgiving is approaching. Never have I been more grateful...

The McDonald parents surely have a lot to be thankful for; The improving health of their twins was supported on a GoFundMe page. Nearly $300,000 was raised to help in Jadon and Anais' separation. This amount continues to climb to this day, all thanks to the combined generosity of strangers who felt compelled to contribute to bettering the McDonald's circumstances.