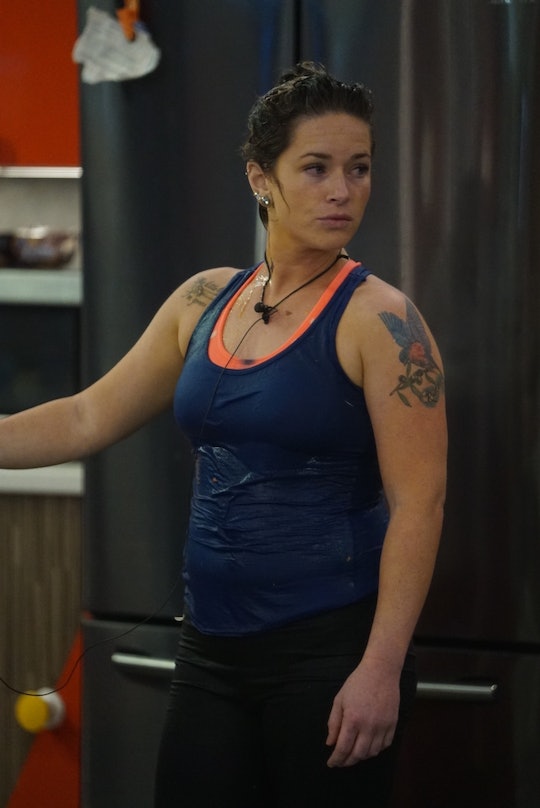 There was a lot going on during Sunday night's episode of Big Brother. After JC and Bayleigh's "cultural sensitivity" discussion, the episode moved right along to the nomination ceremony where newly crowned head-of-household, Sam, decided to put up Haleigh and Kaitlyn. However, Sam's reasoning for nominating the two women led to Twitter accusing Sam of slut-shaming, and they're not off base.

Thursday night's episode left off with the houseguests doing an endurance competition to determine the new HOH, and after the house blew up when Winston was evicted instead of Brett, everyone was vying for power. Sam and Tyler ended up being the final two still hanging on to the trees to become HOH, but Tyler decided to let Sam have the win, making her the new HOH. The power then quickly went to Sam's head.

She immediately let it be known to the houseguests that she already knew who she wanted to put on the block and she wouldn't be doing any one-on-one conversations with people. She also told everyone that no one would be allowed in her HOH room without her permission or unless she was in there as well. However, none of this compared to her nomination speech, which left both Haleigh and Kaitlyn in tears.

"I think you [Kaitlyn and Haleigh] take the most from the house and contribute the least," Sam said in her speech. "I don't care for how the two of you treat the young men in the house. I think that they deserve more respect, and I think that it is the opposite of female empowerment. And I think that you should both respect yourselves more."

Over the course of the season, Kaitlyn has been called out by fans for flirting with Faysal and Tyler, as well as some of the other guys in the house, but this was mainly a topic of concern because she has/had a boyfriend back home. As for Haleigh, besides becoming close to Faysal she hasn't been flirting with any one else in the house, but even if she was that's her right to do so. It's not against the rules for people to flirt with each other in the house; that's why showmances exist.

Additionally, the fact that Sam only called out the women for being flirtatious was very telling. As a number of people pointed out on Twitter, the guys often walk around the house shirtless and it's not like the guys are pushing the girls away when they're flirting. Faysal made it abundantly clear that he was interested in Haleigh and it was actually Haleigh who at first turned him down because she knew being in a showmance wouldn't be good for her game. Similarly, Tyler has definitely taken advantage of the fact that Kaitlyn has been close with him.

For Sam to accuse only the women of basically using their bodies to try to win this game, it definitely came off as slut shaming and misogynistic. Sam's nomination had nothing to do with gameplay and was entirely personal. What made the whole thing even more surprising was Sam knows that because of her power no matter who leaves this week there's a chance they can return to the game.

Still, Sam just painted a big target on her back and it's very possible that neither Haleigh nor Kaitlyn will leave, which means they'll both still be in the house and may choose to take a shot at Sam because of what she said. Thus, it makes no sense that Sam would decide to make this the week to attack these two women, especially when as Haleigh pointed out in the Diary Room, she's never even really interacted with Sam before.

With the veto competition still on the horizon it's possible either Haleigh or Kaitlyn will be pulled off the hook and Sam may have to nominate someone else. If that does happen, hopefully Sam's next speech won't be as shaming as this one.