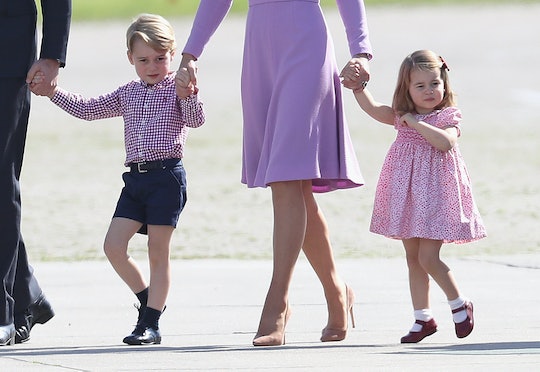 Twitter Can't Get Enough Of This Hilarious Prince George Meme

4-year-old Prince George isn't exactly known for being the cheeriest royal heir when it comes to accompanying his parents on official royal outings. But, honestly, the fact that the future monarch seems to have zero patience for public life only makes him more adorable (I mean, is he not all of us?). But on a recent stop in Hamburg, Germany Friday as part of the Duke and Duchess of Cambridge's European royal tour, the young prince had the opportunity to check out a helicopter — and seriously, he was overjoyed. The resulting photos were amazing, but now, people have turned this photo of Prince George into an adorable meme, and it's basically internet perfection.

As much as it may seem like Prince William and Catherine, the Duchess of Cambridge, might totally have it made — how grueling can it really be to cut ribbons and attend ceremonies every now and then? — it can't actually be easy to be expected to parent two young children perfectly when the entire world is watching. Anyone who has spent time around a 4-year-old likely understands they don't often have a ton of patience for boring things, so it's really no surprise that greeting dignitaries and having his photo snapped by photographers wasn't exactly Prince George's idea of a good time. But according to The Telegraph, that all changed once the young prince — who has been described as "helicopter crazy" — had the chance to step into the cockpit of a helicopter waiting on the Hamburg runway.

His excitement was pretty much the purest thing ever, and it didn't take long for social media to use the image for what it does best: totally on-point meme creation.

For one, the pic of Prince George is pretty much perfect for summing up almost every human thought:

Because honestly, he's totally living his best life in that helicopter:

It's definitely not the first time though, that Prince George has given Twitter perfect meme material:

But it's clear that seeing Prince George look so unabashedly excited has made people's entire day:

But too-cute-for-words pics have also spawned some unexpected commentary: some gay men have tweeted that Prince George's pose in the photo reminds them of themselves as children, with a number of tweets even referring to the boy as a "gay icon."

The idea of publicly discussing a 4-year-old's sexual identity feels unfair and inappropriate for so many reasons, and many Twitter users responded as such. But in an article for the New Statesman, writer Louis Staples — who described himself as "a man who was visibly gay from a young age" — argued that, actually, for many gay men, the photo of Prince George felt significant not because they felt it meant he may or may not be gay. Prince George's sweet pose, he explained, was something that represented for many of them the early years in their lives where they felt like they could actually be themselves without fear of ridicule.

The reaction to this photo isn’t really about sexuality; it’s about the innocence of childhood. When I look at the carefree image of George, it reminds me of those precious years in early childhood when I didn’t know I was supposed to be manly. The time before boys are told they should like 'boy things,' before femininity becomes associated with weakness or frivolity. Thanks to a supportive environment created by my parents, I felt that I could play with whichever toys I wanted for those short years before the outside world pressured me to conform.

Although it doesn't entirely feel OK to have this conversation sparked by a young boy's photograph, it's clear that Staples raised an important point. Regardless of whether Prince George — or any other little boy — turns out to be gay (a fact that would be beside the point), the reality is that narrow ideas of masculinity and gender are placed upon children at such a young age.

At 4 years old, it's likely that Prince George will soon pick up on the unspoken expectation that boys aren't "supposed to" act or look in any way girly or feminine. That's a message that is harmful for all children — teasing a boy for supposedly acting like a girl is ultimately an insult against girls as well — but for men like Staples, who perhaps felt less traditionally-masculine as children, it can be particularly damaging.

The takeaway though, it seems, is really that what's most important about the sweet photo of Prince George is that it shows him having a totally pure childhood experience of excitement and joy. And whether it serves as a jumping off point for a deeper conversation about restrictive ideas about gender, or just as a feel-good meme, hopefully we can all agree that there was likely no one on the planet enjoying anything more that day than Prince George was enjoying being in that helicopter.