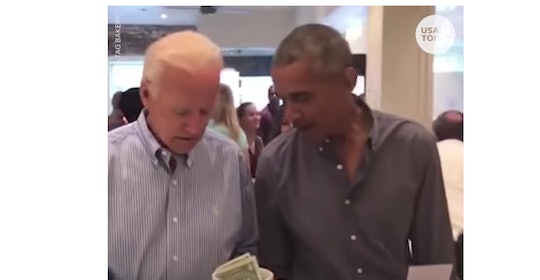 Politics aside, it's difficult to argue the bromance that blossomed between Barack Obama and Joe Biden wasn't something to be admired. The former president and vice president just worked so well together — and they obviously cared for each other beyond the scope of their duties. Through their years in office, their unique relationship even inspired a number of memorable memes. So you can probably imagine the internet's response when the dynamic duo recently reunited. In fact, it seems that Twitter can't get over Barack Obama and Joe Biden meeting up for lunch at a nonprofit bakery.

On Monday, Obama and Biden met up for lunch at the Georgetown neighborhood in Washington, D.C., CNN reported. The pair hit up Dog Tag Bakery — which runs a fellowship program that teaches veterans, military spouses, and military caregivers about business. As Us Weekly reported, the bakery’s chief executive, Meghan Ogilvie, was told about 6 minutes beforehand that the former president and vice president would be dropping by. “I’m a little bit awestruck,” Ogilvie told The Washington Post of the special visit, according to Us Weekly. Ogilvie then ensured all of the 13 fellows were present to meet them.

In video footage from the Dog Tag Bakery, Obama and Biden can be seen placing their order — which consisted of ham and gruyère sandwiches for each of them, along with a side salad for Obama, and a slice of mint basil blueberry cake for Biden, according to CNN.

“Hold on a sec, what did you get here?” Obama asks Biden in the clip, according to People.

“I’ve got one of these, what are they called, ham and cheese,” Biden replied, as he holds up his plate to examine it.

"Yeah, that looks pretty good. I think I gotta have one of those, too," Obama said

"Give the boss one of those, too," Biden told the worker at the cash register.

After the pair finished their lunch, they took time to meet, take selfies with, and talk to the fellows about their future business plans, CNN reported. And evidently, Obama told Ogilvie that he was aware of "the good work you've been doing" at the bakery. According to the Dog Tag Bakery's website, the bakery offers a five-month program — for veterans, their spouses, or their caregivers — which allows fellows to earn a Certificate in Business Administration from Georgetown University's School of Continuing Studies. The fellowship also allows them participation in professional workshops and wellness programs, as well as gaining work experience at the bakery itself. In all, Obama and Biden were at the bakery for about 45 minutes, according to CNN — and apparently they ended up drawing quite a crowd. However, they didn't tell us to stop having people come in," Ogilvie said.

Twitter was rightfully emotional about the Obama-Biden reunion. "omgg @BarackObama and @JoeBiden just ate lunch together in dc. miss them so much," one Twitter user wrote.

Another person tweeted, "Is there video? Yes. Is it video that will make you say, 'How is it possible that Barack Obama gets f*cking cuter EVERY DAY?" Yes."

Yet another Twitter user wrote, "Here’s some news to make your day: Barack Obama and Joe Biden still have lunch dates together these days and it’s the most precious bromance ever."

"I love that Joe and Barack are still seeing each other!" yet another person tweeted.

A particular detail of Obama and Biden placing their orders at the bakery that seems to have stuck with people is when Biden called Obama, "Boss." One Twitter user wrote, "Joe telling the sandwich guy to 'get the boss one of those' is my favorite moment of 2018."

Another Twitter user wrote, "Biden still calling Obama ‘boss’ did extremely complex things to my emotions, and I’m not even American."

Yet another person tweeted, "Best moment is when @JoeBiden called @BarackObama "The Boss" like as far as he's concerned, he's still the president. 45 who?"

I have to say — like a good portion of the internet, it seems – I'm oddly elated about Barack Obama and Joe Biden's recent lunch date. Not only did they pick a worthy cause to support (and some tasty-sounding sandwiches, to boot), but their relationship is still so fun to watch. From their matching sandwiches, to the "boss" comment, everything about this short video clip is peak bromance. The former president and vice president should definitely meet up for a lunch date again in the near future — and I'm sure Twitter would agree.