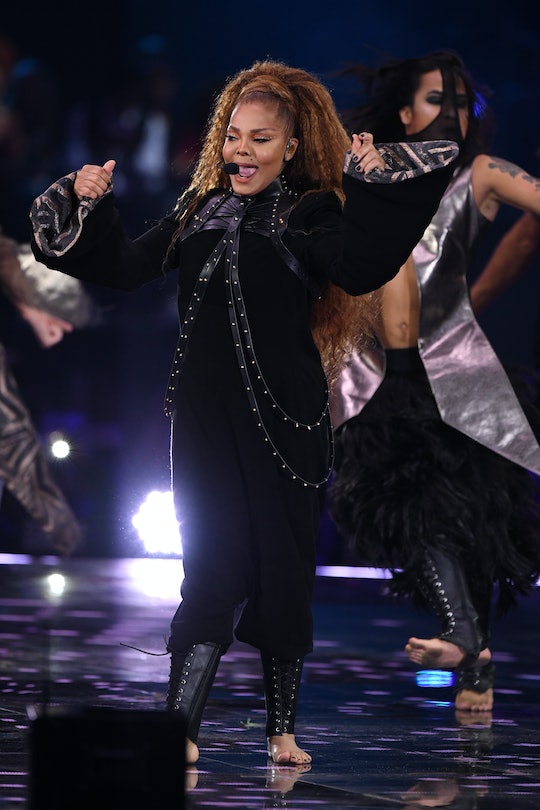 The 2004 Super Bowl is a thorn in the side of any feminist. After Justin Timberlake grabbed Janet Jackson's costume (inadvertently or not), baring her body to the world, Jackson was blacklisted from the Super Bowl while Timberlake was... invited back. The injustice seemed especially pronounced during yesterday's Super Bowl — and what turned out to be another shirtless singer. Twitter celebrated #JanetJacksonAppreciationDay before Adam Levine's shirtless performance brought up the issue of double standards all over again.

It actually all started in 2018, as Glamour reported. Former NFL star and filmmaker Matthew A. Cherry proposed the idea of a day to honor Jackson, who, when looked at through the lens of societal progress since the early 2000s, at least in my opinion, took the fall for something that was Timberlake's fault.

Happily, when it came time to prep for the 2019 kickoff of football's biggest day, loyal Jackson fans and appreciators of social justice hadn't forgotten, with the hashtag getting revived, as Huff Post detailed. Stars including Gabrielle Union bowed to the Queen of Pop yesterday.

"I didn't think I looked cool enough to meet my hero," Union shared yesterday on Twitter. "Y'all, she got up, hugged me, & told me she was proud of me. I. Died. #Janetjacksonappreciationday."

And the difference in the treatment of a black woman versus a white man in the wake of a controversy was brought up all over again when Timberlake was invited back to the Super Bowl last year, as Glamour reported in an additional article.

Many fans noticed the hypocrisy, the magazine reported, recalling that Jackson, besides being banned from the NFL for life after the infamous so-called "wardrobe malfunction," was also uninvited from that year's Grammy Awards. In 2014, former FCC chairman Michael Powell admitted that, looking back, Jackson had been unfairly targeted for the incident as opposed to Timberlake, Glamour added.

Many Jackson supporters noted last year that Timblerlake has never publicly apologized to Jackson for letting her shoulder the blame, USA Today reported, launching yet another hashtag, #JusticeforJanet. The paper, however, noted that Timberlake implied he has personally made his amends to the singer.

Ironically, yesterday's game brought up the old wound yet again when Adam Levine took off his shirt during his halftime performance, revealing a tattoo-filled torso, as Us Weekly reported. The singer's bare chest, which didn't seem to shock the crowd at all, reminded some Twitter fans that there is still a gigantic double standard.

I don't have a shred of doubt that the double standard is still pretty big and that both racism and sexism played into Jackson's fate post-2004, when her career seemed to stall, as website Toofab noted.

But class and talent will always out in the end: E! News reported that the Rhythm Nation songstress, who is currently touring, will be inducted into the Rock & Roll Hall of Fame in March. About time.