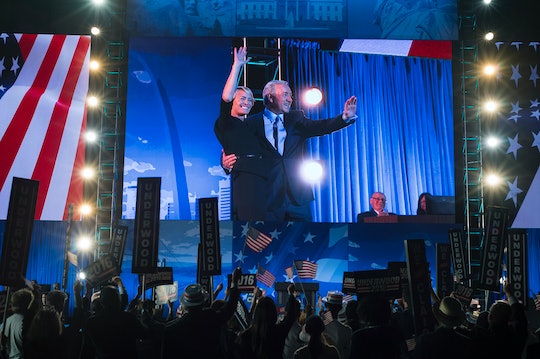 In a week dominated by scandal, failed coups, and party feuds, the 2016 Republican National Convention felt more like a television drama than one of the nation’s historic events. Even the long-awaited climactic moment — the speech where Republican front-runner Donald Trump officially accepted the party nomination for president — was surreal enough that it could easily have been a scene from one of television’s popular political dramas. But which show? Was the RNC more like an episode of Scandal or The West Wing in its heyday? Well, according to Twitter, Trump’s diabolical takeover of the GOP has always mimicked the calculated scheming of modern-day Machiavelli Frank Underwood from the Netflix series House of Cards. When the real-life candidate took the stage on Thursday night to accept the party mantle, Twitter wasted no time comparing Trump’s RNC speech to Frank Underwood’s “Make America Work Again” speech from the show’s third season. And honestly, the jokes were pretty spot-on.

To be clear, people have been drawing comparisons between Trump’s and Underwood’s presidential campaigns since the billionaire first announced his candidacy. The show’s recent plot twists — including a candidate willing to stir public fears of terrorism and a party out-of-step with public sentiment — might have seemed too far-fetched for real life a year ago. But not after watching Trump’s steady rise among conservative voters and in the Republican party over a field of more established candidates.

And not after listening to Donald Trump’s first address as the GOP’s official nominee for president. Here’s the opener of Underwood’s “Make America Work Again” speech, as posted on Reddit:

For too long, we in Washington have been lying to you. We say we're here to serve you, when in fact, we're serving ourselves. And why? We are driven by our own desires to get reelected. Our need to stay in power eclipses our duty to govern. That ends tonight. Tonight, I give you the truth. And the truth is this: The American dream has failed you. Work hard? Play by the rules? You aren't guaranteed success. Your children will not have a better life than you did. Ten million of you can't even get a job, even though you desperately want one. We've been crippled by Social Security, Medicare, Medicaid, by welfare, by entitlements. And that is the root of the problem: entitlements.

Let me be clear. You are entitled to nothing. You are entitled to nothing. America was built on the spirit of industry. You build your future. It isn't handed to you. And the problem with Washington is that we haven't given you the tools to build it. The only way for us to serve you is to give you the means to serve yourselves. Well, that's exactly what I intend to do. Not handouts. Jobs. Real paying jobs.

And here’s an excerpt from Trump’s GOP acceptance speech this week, as posted on Politico:

It is finally time for a straightforward assessment of the state of our nation. I will present the facts plainly and honestly. We cannot afford to be so politically correct anymore. So if you want to hear the corporate spin, the carefully-crafted lies, and the media myths the Democrats are holding their convention next week.

But here, at our convention, there will be no lies. We will honor the American people with the truth, and nothing else.

I will tell you the plain facts that have been edited out of your nightly news and your morning newspaper: Nearly Four in 10 African-American children are living in poverty, while 58% of African American youth are not employed. 2 million more Latinos are in poverty today than when the President took his oath of office less than eight years ago. Another 14 million people have left the workforce entirely. Household incomes are down more than $4,000 since the year 2000. Our manufacturing trade deficit has reached an all-time high – nearly $800 billion in a single year. The budget is no better.

Hmmm. If Trump’s speech left some viewers with a feeling of “life imitating art,” they weren’t alone. As the Republican nominee ticked through his critique of the nation under Democratic leadership, Twitter users ticked through all the ways #TrumpPence2016 suddenly felt like #Underwood2016.

The only difference, at least according to some, was that, unlike Underwood’s 2016 platform, the Republican focus on “Mak(ing) America Work Again” had little to say about actual job creation.

HOC fans may be anxiously awaiting the day that season five (finally!) drops on Netflix, but they certainly won’t be bored during the wait. It looks like Trump and the Republicans have once again stepped up to fill the gap. As for what Trump has planned for the next season — or rather, for the general election — we’ll all just have to tune in.