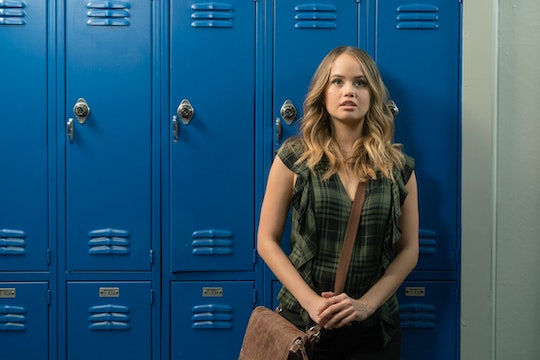 Insatiable is a revenge story. The series, which premieres on Netflix on August 10, is about a girl named Patty who is relentlessly bullied at school because of her weight. Then one summer she is struck in the face, has her jaw wired shut, and somehow loses a significant amount of weight because of it. Feeling free to reinvent herself, Patty decides to seek vengeance on everyone who hurt her. The premise has Twitter calling Insatiable fat-phobic, and here's why.

Where to start? Lead actress Debby Ryan wears a fat suit for the scenes that take place before Patty's transformation. That feels incredibly dated and tacky, like an episode of The Tyra Show from thirteen years ago where she tries to see the world from someone else's perspective, as though you can access someone else's lived experience for just a few hours. Then there is the transformation itself, which promotes harmful and unrealistic ways to lose weight. With her jaw wired shut, Patty is presumably unable to eat, which results in her weight loss. In the trailer, it is framed as an accidental side effect. But plenty of real people do use extreme methods to lose weight.

Patty doesn't eat and is then "rewarded" with popularity from the classmates who previously belittled her. Patty can only "win" against her bullies once she has engaged in unhealthy behavior to become thin. Patty does not find acceptance or happiness as who she is, but must change entirely and lose weight to solve her problems. That's not a good message to send.

These were among the many issues raised by people on Twitter in response to Insatiable's first trailer. Some users felt the show did not resonate at all with the actual experiences of women dealing with the societal expectations placed on their bodies. Criticism of the show was wide-raging, coming from both regular viewers and public figures, like The Good Place star Jameela Jamil and writer Roxane Gay.

A petition was also created to stop the show's release, and currently stands at 114,746 signatures. Created by Florence Given, the petition asks for Insatiable's cancellation, saying, "For so long, the narrative has told women and young impressionable girls that in order to be popular, have friends, to be desirable for the male gaze, and to some extent be a worthy human...that we must be thin."

"The toxicity of this series is bigger than just this one particular series," Given continued. "This is not an isolated case, but part of a much larger problem that I can promise you every single woman has faced in her life, sitting somewhere on the scale of valuing their worth on their bodies, to be desirable objects for the male gaze. That is exactly what this series does. It perpetuates not only the toxicity of diet culture, but the objectification of women's bodies."

Some of the show's cast and crew responded to the concerns. Co-star Alyssa Milano tweeted that the series was not shaming Patty, but "addressing (through comedy) the damage that occurs from fat shaming." Ryan posted a long statement to Twitter in which she cited her own body image issues as part of what drew her to the show in the first place. She wrote that the show uses satire to explore the ways in which women's bodies are shamed and policed.

Showrunner Lauren Guissis wrote on Twitter that Insatiable came from a very personal place for her. When she was young and bullied, she wanted revenge on those who hurt her. "I thought it I looked pretty on the outside, I'd feel like I was enough," she said. "Instead, I developed an eating disorder...and the kind of rage that makes you want to do dark things." She wanted to share that discomfort through humor, ending with a plea to give the series a chance. "The show is a cautionary tale about how damaging it can be to believe the outsides are more important — to judge without going deeper."

Users argued that that didn't erase the potentially damaging effects of the show or the negative tropes it perpetuated.