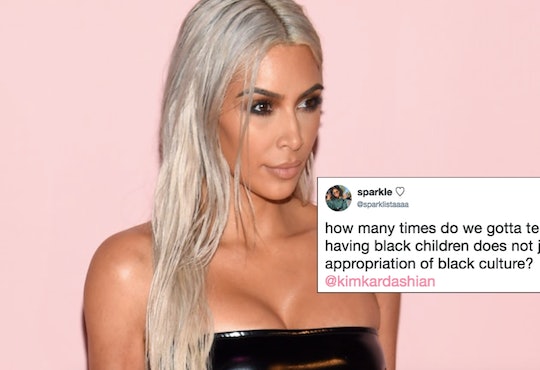 Well, Kim Kardashian certainly knows how to stay in the news. Shortly after she and husband Kanye West welcomed their third baby, the reality star posted a video of herself with cornrows that's causing some controversy. Now, Twitter is dragging Kim Kardashian's "Bo Derek" braids, as she called them in a Snapchat video, with many people feeling like she's plunging straight into an ocean of cultural appropriation. Romper's request from Kardashian's reps regarding the backlash was not immediately returned.

"So guys, I did Bo Derek braids, and I'm really into it," the Keeping Up With The Kardashians star said in a Snapchat video that's now making the rounds online, showing off a beaded, braided style. For those who don't know, Derek was the original white woman to make waves for wearing cornrows in the 1979 film 10, touching off a cornrows craze even though black women had been wearing the hairstyle for years.

Unsurprisingly, many people on the internet were not pleased to see Kardashian in cornrows, and especially not when she attributed their significance to Derek, as opposed to acknowledging their actual origin in black culture, as Teen Vogue pointed out. It's not Kardashian's first time being accused of cultural appropriation — she has previously worn "boxer braids" and presented them as a kind of hot, new, signature trend — but she doesn't seem to have learned from previous mistakes.

If anything, she's doubling down. Despite a social media outcry after her Snapchat video, she posted a picture of herself in the braids on Instagram on Monday, with the caption "BO WEST."

And people on Twitter had a lot of feelings.

Some Knew Exactly What Was Coming

Some people who saw Kardashian's Snapchat knew right away that the whole thing was going to blow up, and that she'd better prepare to get dragged.

Others Wanted To Set The Record Straight

Actress Amandla Stenberg has spoken up in the past about cultural appropriation, and how damaging it can be. Back in 2015, according to HuffPost, she made a video called "Don’t Cash Crop My Cornrows," in which she explained:

Appropriation occurs when a style leads to racist generalizations or stereotypes where it originated but is deemed as high-fashion, cool or funny when the privileged take it for themselves... Hip hop stems from a black struggle, it stems from jazz and blues, styles of music African-Americans created to retain humanity in the face of adversity. On a smaller scale but in a similar vein, braids and cornrows are not merely stylistic. They’re necessary to keep black hair neat.

And when Kardashian's sister Kylie Jenner posted a picture of herself in braids that same year, writing "I woke up like disss," Stenberg called her out on Instagram. According to HuffPost, she wrote, "When u appropriate black features and culture but fail to use ur position of power to help black Americans by directing attention towards ur wigs instead of police brutality or racism #whitegirlsdoitbetter"

So it's no surprise that, after the latest Kardashian photo sparked a debate on appropriation, many people on social media were quick to bring up some Stenberg wisdom to counteract the ignorance.

Others flooded Twitter with pictures of black women wearing Fulani braids, in order to show that Bo Derek was not the most appropriate reference point.

Some Thought It Was Especially Bad, Given Her Family

Kardashian is married to a black man, rapper Kanye West, and they have three children together, so some pointed out that she really should know better.

And Others Are Just Completely Over It

Again, this isn't the first time that a member of the Kardashian family has done something like this, so while some people are still feeling outraged, others are just exhausted by what seems like a continual feigned ignorance.

Kardashian has yet to publicly comment on this latest backlash, but it has clearly struck a chord with her fans and it's apparent that they hope she takes their outrage to heart this time.