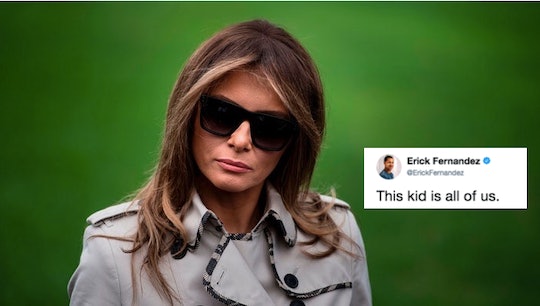 Students at a Detroit, Michigan, middle school had two unexpected visitors on Monday — first lady Melania Trump and Secretary of Education Betsy DeVos. The women came to Orchard Lake Middle School to speak for National Bullying Prevention Month to preach messages of inclusion that, honestly, didn't seem to go over too well. Basically, Twitter is dying laughing over this one photo of kids listening to Melania talk about bullying, because the distrust just reads all over their faces. "Seriously lady?" The kids seem to ask. "Better save your breath."

According to local news station Michigan Live, Melania asked students to be kinder to their classmates, starting with habits at lunchtime. She gave a short speech in the cafeteria, according to the outlet, and insisted: "I encourage you to find a new friend and eat lunch with a new friend. Ask them what they like. Ask what their hobbies are so nobody [becomes] sad... stressed... and everybody feels included."

After the big event, she visited a sixth grade class, telling a group of students: "I always believe that you need to treat each other with respect and kindness and compassion, but also stay true to yourself." When in doubt, "just listen to your heart," she said, as Michigan Live reported.

Melania also shared her views on drugs and alcohol to the kids, straying a bit from the whole don't-bully-your-friends thing. "I always say no drugs, no alcohol, no cigarettes. Because it doesn't do any good... It just damages," she informed the students, according to The Poke.

A photo from Michigan Live's coverage, however, suggests that the kids really weren't buying any of it. Who knows what they're taught, at home or at school, but suffice it to say, Melania's message of "respect and kindness and compassion" wasn't the most authentic take for a woman whose husband has berated disabled reporters, spoken crudely of women, and has made a hobby out of giving political rivals nicknames and monikers. The only thing more contradictory than an anti-bullying campaign would be an anti-cyberbullying one.

In the now-viral photo, Melania crouches by a table of kids who all look suspicious to say the least. And the Twitter commentary of imagined narrations of the kids' reactions? Totally priceless.

Twitter thought that one girl appeared to shun Melania entirely, as per her mother's wishes

And overall, as Twitter beautifully pointed out, the kids just weren't that into it, and it read all over their faces

Because, let's be real here: President Donald Trump's rants, past or present, would provide quite the counter-balance to all of this "listen to your heart" talk.

Bullying and intimidation characterize the Trump administration's M.O. On a daily basis, President Trump takes to Twitter to call out individuals who disagree with or challenge him; every day it seems as if there's a new victim.

On Tuesday morning, for instance, he dedicated a series of five tweets to railing Sen. Bob Corker, calling him "liddle" and a "lightweight" while attacking his record. He dubbed Rep. Frederica Wilson "wacky" two days prior. The POTUS has long been dubbed a bully, and his wife's middle school tour did not make people forget that.

These skeptical kids have the right idea — ignoring the fact that her husband is perpetuating the problem can't be made up for by a classroom roundtable. Honestly, Melania's inclusion speech probably would have been better written for Trump himself.