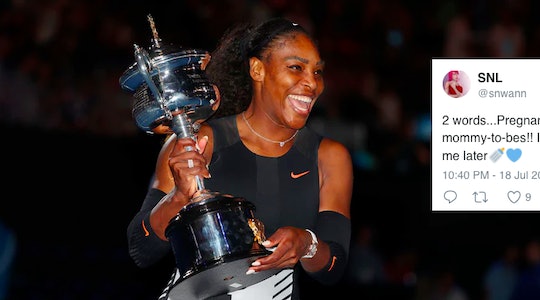 Tennis champ Serena Williams and fiancé Alexis Ohanian are preparing to welcome their first child together later this year, and although Williams's athletic prowess is so advanced that she basically borderlines on being superhuman, her recent tweet suggests that she still isn't immune to the discomfort involved with carrying a growing human inside of your body. On Thursday, Serena Williams asked Twitter users for pregnancy advice, hoping they might have some tips to make it easier for her to be more comfortable in bed at night. And since it's a struggle that virtually every woman who's ever been pregnant can totally relate to, Williams received a slew of extremely helpful replies.

According to The Huffington Post, Williams wrote that she was specifically having trouble rolling from one side of her body to the other during the night. Normally, something like changing sleep positions is a no-brainer — many of us do it without even being aware. But as any pregnant woman knows, as your belly gets bigger, trying to shift positions in the night can feel like a massive undertaking (not helped in any way by the similarly-annoying fact that you also have to wake up repeatedly to pee). Williams, it seems, has definitely reached the stage of pregnancy-related sleep disturbances, but lucky for her, Twitter was all over it.

One of the most helpful suggestions? That Williams might want to start sleeping with a body pillow ASAP. It was personally my prized possession when sleeping while pregnant with twins started to become incredibly uncomfortable (you can wedge the pillow up under the belly for some extra support, and what it's time to roll over or get up for a pee break, the pillow can help provide some very much-needed leverage).

Other users has some more creative recommendations:

While some moms wrote that they'd actually ditched their beds all together late in their pregnancies in favor of plush reclining chairs:

Others reminded her that, unfortunately, when you're really far along, sometimes there's literally nothing you can do to make yourself comfortable:

There's been no word yet on whether Williams intends on taking her followers' advice, but the fact that she even asked them for suggestions in the first place was something that many people seemed to totally love:

Serena Williams may be a completely dominating force in the world of tennis, and it seems pretty safe to assume that few can compare to her level of both physical and mental fortitude. But as many, many women before her can attest, sometimes pregnancy can be challenge in what feels like an unlimited number of ways — some of which you might never anticipate.

Williams's athletic background still means she's likely in a great position to have a relatively easy pregnancy and delivery, but sometimes the truth is that being pregnant still kind of sucks. Hopefully the mom-to-be will be able to find some kind of relief (seriously, get a pregnancy pillow!), but if not, she can at least find comfort in knowing that in a few months, all of this discomfort will payoff when she gets to hold her baby in her arms. And in the meantime? It seems like fans are loving how open she's been about her pregnancy experience. She may be a tennis phenom, but, Serena Williams might have a lot more in common with the rest of us than we think (at least when it comes to the ups and downs of pregnancy.)