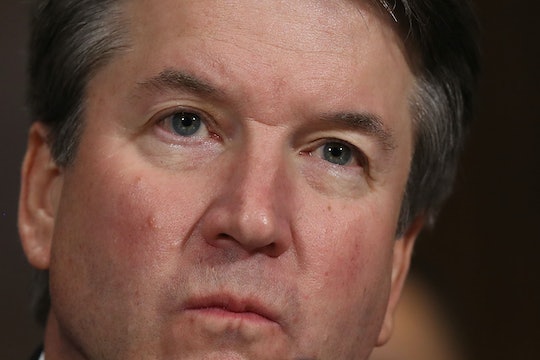 Supreme Court nominee Brett Kavanaugh testified before the Senate Judiciary Committee on Thursday, answering questions about the allegation of sexual misconduct that at least three women have leveled against him ahead of his confirmation. Ultimately, it's up to those 17 men and four women to decide if the allegations are credible, but in the court of public opinion, things did not go well; the people of Twitter are thoroughly unimpressed with Kavanaugh's testimony.

Kavanaugh's demeanor varied widely throughout the hearing, depending, for the most part, on who was asking the questions. When Republicans lobbed softball questions at him, he laughed and joked, but Democrats fielded rants and interruptions, shouting and tears. None of this, according to the folks live-tweeting the event, was particularly appropriate given the gravity of the situation: a man vying for a lifetime appointment to the highest court, where his impartiality, composure, and level-headedness would be of the highest value as he shaped American law, potentially for generations to come.

Much ado has been made about Kavanaugh's yearbook, and the many, many off-color "jokes" it contains, as The New York Times has detailed. While he admitted that some of its content was cringeworthy, Kavanaugh wrote off the book's relevance, because it's super old, and also, teens ¯\_(ツ)_/¯. But at the same time, he felt that an old calendar he claims he kept from the same time period is a completely reliable piece of evidence.

According to all three of Kavanaugh's accusers, he was a big drinker in high school and college, as The New York Times reported, and was drunk during each of the alleged incidents. Kavanaugh vehemently denies any sexual impropriety, according to Fox News, but boy howdy, does he acknowledge that he's a fan of beer. What does that have to do with anything? I don't know! But still, beer.

In the midst of Kavanaugh's rant, President Donald Trump, who has nearly two dozen alleged victims of his own, as detailed by The Guardian, reportedly admired his nominee for sticking it to the Democrats, as The Washington Post's Robert Costa tweeted.

According to Kavanaugh, as the Los Angeles Times reported, the worst thing to come out of Dr. Christine Blasey Ford's allegations was that he might not be able to coach girls' soccer anymore. I mean...

Oleander is beautiful, but deadly. Glamglow Supermud mask will make your skin amazing, but it costs an arm and a leg. Everything, and everyone, can have good and bad qualities; the world isn't black and white. (For the record, just don't eat your flowers, and the mask is totally worth it, but scrape the sides of that jar, honey. Kavanaugh, however, is another story.)

Honestly, let's imagine for a moment that we were all in Kavanaugh's shoes, and innocent. Is "attack the alleged sexual assault victims" really the most magnanimous move here?

Also, I feel like someone whose job is interpreting the law should, oh, I dunno, be familiar with the law?

Obviously most people have their own thoughts and opinions, and for most American adults, one of them is probably either "I hate Democrats" or "I hate Republicans." But a judge — any judge — should hold those opinions close to the vest. The entire job basically boils down to being fair to everyone. Now, I'm not saying I could keep myself from openly showing contempt for the opposing party of my choice, but I'm no Ruth Bader Ginsburg, now am I? Well, neither is Kavanaugh, it seems.

Thank you, internet stranger. After all this infuriating nonsense, this game is exactly what America needs right now. Apart from a time machine, of course.