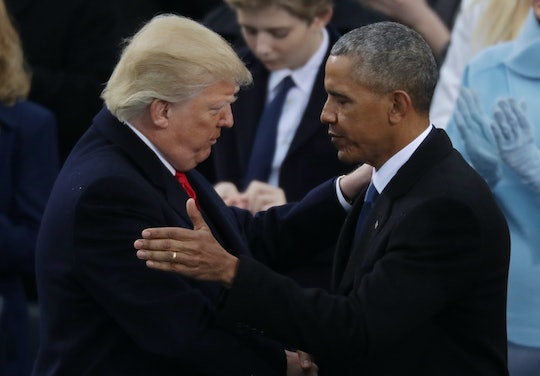 Twitter Points Out Everything #ObamaWasBetterAt After Trump's Racist Remarks

The midterms of 2018 marked an unprecedented shift in elected congresspeople. Namely, more women and minorities ran and were elected for the roles than before. Since they arrived in D.C. earlier this year, these same individuals have been working tirelessly to be transparent about what President Donald Trump doing, notably visiting detention centers at the U.S. and Mexico border earlier this month and reporting inhumane conditions. Undoubtedly frustrated by their efforts to expose his administration, Trump told those same minority women to go back to their countries of origin, and Twitter has responded by pointing out everything #ObamaWasBetterAt, a hashtag that quickly began trending on Tuesday.

On Sunday evening, Trump tweeted that Democratic Reps. Ilhan Omar, Rashida Tlaib, Alexandria Ocasio-Cortez and Ayanna Pressley should "go back and help fix the totally broken and crime infested places from which they came." Trump also tweeted, "So interesting to see 'Progressive' Democrat Congresswomen, who originally came from countries whose governments are a complete and total catastrophe, the worst, most corrupt and inept anywhere in the world (if they even have a functioning government at all), now loudly... and viciously telling the people of the United States, the greatest and most powerful Nation on earth, how our government is to be run."

Of course, Twitter has responded succinctly, sharing memes, photos and notes of everything that Trump's predecessor, President Barack Obama, did better than him... chief among them, his ability to be diplomatic toward others, particularly those he worked with.

Obama Was Better At... "Being A Human Being"

One user shared an iconic photo of Obama playing with a baby on the floor of the Oval Office. It's hard to imagine Trump doing anything of the sort.

Obama Was Better At... "Having 'REAL' Celebrities Show Up To Get Their Awards"

This year, Trump will award the Medal of Freedom to an economist whose theory on lower taxes spurring a healthy economy, according to the White House. In contrast, Obama gave awards to individuals such as Ellen DeGeneres, for her work in LGBTQ+ advocacy, and other social justice issues.

Obama Was Better At... "Being Respected By The Rest Of The World"

Another user shared a photo of Obama laughing amongst other legislators, emphasizing the respect and diplomacy with which he treated others.

Obama Was Better At... "Marriage"

Pointing out that Obama was indeed in a seemingly happier relationship with wife Michelle comes just weeks after Newsweek reported that there were even more claims that Trump had allegedly had other extramarital affairs aside from the highly publicized ones, such as were speculated with Stormy Daniels, as The Guardian reported.

Obama Was Better At... "Being Physically And Mentally Healthy"

Though one cannot assume the physical, mental or emotional health of an individual without knowing them, it seems evident that Obama acted less irrationally, angrily and with more care for both his physical health as well as his temperament.

Obama Was Better At... "Never Needing A Lawyer"

As Trump has pretty much been in legal battles nonstop since well before he elected, it bears a striking contrast to the Obama administration, which was only involved in a fraction of what Trump has since going into office, according to USA Today.

Obama Was Better At... "Being Good To People No Matter What Their Race, Color, Religion, Sexuality, Political Views, Or Gender Was"

Trump's latest tirade against the minority congresswomen — which Rep. Omar denounced a "blatantly racist" and "the agenda of white nationalists," according to NBC News, something Trump has vehemently denied — stands in stark contrast to Obama's willingness to be kind and good to all people, no matter their background.

Obama Was Better At... Basically Everything A President Should Be

Another user said that Obama was better at "executive leadership, voicing ideals, economic growth, respecting others, youth involvement, tweeting, humility, international diplomacy, negotiating, and giving speeches," which pretty much sums up the entirety of what makes for a really good president.