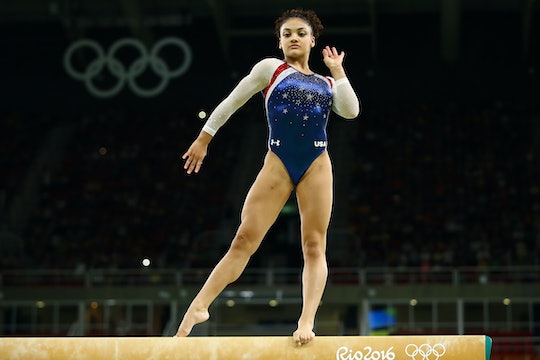 On Tuesday, Good Morning America revealed the lineup of contestants on the newest season of Dancing With The Stars. The show is gearing up for its 23rd season, and features Olympians Ryan Lochte and Laurie Hernandez, model Amber Rose, and a former The Brady Bunch actress Maureen McCormick, who played Marsha Brady. There are a few surprises as well — former Texas Gov. Rick Perry will be putting on his dancing shoes! Twitter predictions for Dancing With the Stars Season 23 are coming in, and there seems to be an early favorite: Laurie Hernandez.

Dancing With the Stars won't premiere until Monday, Sept. 12 on ABC, but many fans are already predicting Hernandez will dance off with the Mirrorball trophy. Hernandez, who won a silver medal for her balance beam performance and helped Team USA win gold at this year’s Olympics, is looking to be a fierce competitor on the dance floor as well. The 16-year-old told Good Morning America that she has previous dancing experience and added "They call me Baby Shakira."

Hernandez also gushed to GMA about her DWTS partner, Val Chmerkovskiy. "Val is a mastermind and it's so nice because he seems really patient and like me, open to new things."

Fan reactions have been mixed since rumors that Lochte would be joining the cast amid his fabrication about being robbed at gunpoint during the Rio Olympics. On Good Morning America, Lochte said he wants to move past his scandal in Rio and focus on the competition, according to E! Online:

I'm definitely really excited. This is completely new for me. I think it's time for me to hang up my speedo and put on my dancing shoes.

Lochte also admitted to GMA that he has no dancing experience.

I'm starting from scratch. This is a new experience. I'm going to treat this like going into the Olympics.

The show’s executive producer, Rob Wade, said on Good Morning America the casting team "started talking to [Lochte] before the Olympics even started."

On the pro side, this season marks the return of both Derrick Hough and Cheryl Burke. Hough, who has won six Mirrorballs on DWTS, wasn’t supposed to return for this season because of other projects. But in an Instagram post, Hough wrote that his fall schedule opened up because Singin’ in the Rain, which he was set to play the lead in on Broadway, has been delayed.

One name not on the list of pros is Mark Ballas, who has been on DWTS since Season 5, and has won two Mirrorball trophies. Fans have been vocal about their disappointment that Ballas won’t be competing this season.

Overall, it looks like this should be an exciting season! Here’s a full list of the cast and their dance partners: