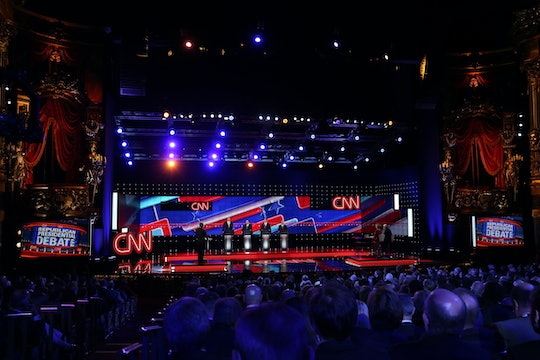 Tonight, nine presidential hopefuls took the stage in Las Vegas in hopes that they could further convince their party to swing their way. The Republican presidential debate on CNN was sure to be a night filled with all the dramatics we've come to expect from the Republican party, but the video of CNN's GOP opening montage was so good not even Hollywood could've jammed that much drama in. There was suspense, suits and ties, Donald Trump, a love story (OK, no love story), and plenty of high-fiving, and a chase for the top! Hell, there was even a villain (Trump, natch), and a hero (though who they think that'll be, I'm still not totally sure). It all only further begs the question: Is the debate about the debate, or is it about the drama?

This debate marks the final GOP debate for 2015, and with the Republican Convention coming up, candidates are hot-to-trot for a space on the ticket. Tonight's stage featured nine hopefuls — Donald Trump, Rand Paul, Carly Fiorina, Ben Carson, Ted Cruz, Chris Christie, John Kasich, and Jeb Bush — and the conversation centered around national security, terrorism, ISIS, gun control, and Donald Trump's favorite topic: closing out borders. In recent weeks, he's been incredibly outspoken about the path he'll take us down as president of the United States. He's proposed a ban on Muslims wanting to enter the United States, calling for a "total and complete shutdown of Muslims entering the United States until our country's representatives can figure out what is going on." He then defended his comments on to CNN's Jake Tapper, saying, "I have many friends that are Muslims, and I will tell you, they are so happy that I did this because they know they have a problem."

But back to the main event, as the trailer promised (it's OK to call it a trailer, right? Since this is totally the opening to the biggest horror flick out this year?), take a look at the GOP's best sense of sensationalism, because Hollywood should definitely take notes:

It's Better Than Monday Night Football