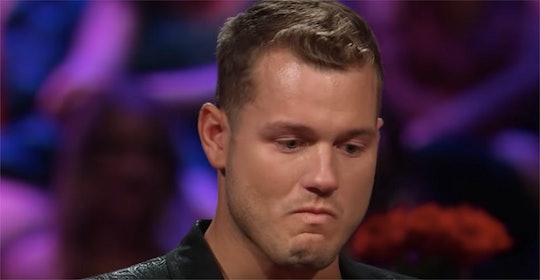 After eight long episodes, Colton Underwood *finally* jumped the fence on The Bachelor following a ton of anticipation and fake outs. Considering this is a pivotal moment (and arguably the season's only climatic moment so far), it's understandable there are plenty of Twitter reactions to Colton's fence jump. Not only are fans thrilled that it finally happened (viewers had to endure too many shower scenes to get here, sheesh), but people are living for the drama. Take us home, ABC.

Before the season started airing, Bachelor host Chris Harrison alluded to Colton losing it at one point during filming. Details were scant at the time, but viewers knew it involved a fence and a breakdown of some kind.

"He just kind of broke and snapped and he was done," Harrison told Entertainment Tonight. "I don't think I realized the severity of it until I was trying to walk after him and obviously you saw the jump of the fence, and then he took off."

Considering Colton isn't the most engaging bachelor (in my humble opinion, of course) I've been waiting for this moment with baited breath. I need to see a grown man jump a fence, and I need to see it now.

Luckily for myself and countless fans out there, Colton finally jumped the fence on Monday, March 4 because Cassie decided to send herself home after realizing that she's not in love with him. The breakup was really difficult for Colton because he feels the strongest connection to Cassie.

"ANNNNNND THE FENCE IS JUMPED," someone said.

"This fence slowly opening while Colton runs off into the dark is one of the best things that has ever happened on this show," one person tweeted.

Another commenter chimed in: "#Colton did that #fence jump cool as shit and disappeared lol he's like leave me the F alone damn."

"Colton’s fence jump was the finest display of athleticism I’ve seen in a decade," another fan wrote.

"Honestly, this whole fence jumping and going missing in the dark of night is all too much," someone else argued.

"HE F—ING VAULTED OVER THAT FENCE OAKZJXOSMSNXN," one person penned.

Now that the fence jump has finally happened, I feel mixed emotions. While I'm thrilled that I won't have to endure any more fake outs, I'm bummed that the most exciting part of the season is over. You can't top a fence jump and Harrison screaming into the dark after a grown man, right? At least fans will have these Twitter reactions to enjoy until the finale on March 11.

As for the next episode, I'm curious to see how they wrangle Colton back to the show. He seemed pretty over it after the jump, right? Maybe Colton realized that storming off in an unfamiliar place wasn't the best idea, or perhaps he was reminded of a contract he's obligated to fulfill. Either way, at least the fence jump has come to pass.