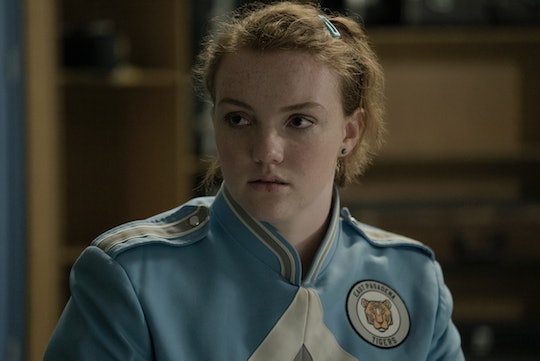 The trailer for Sierra Burgess Is A Loser promised a teen romance about the complications of identity and insecurity, starring two fan favorites from previous Netflix projects. Shannon Purser had first won fans over as Barb on Stranger Things, while Noah Centineo became the internet's boyfriend after To All The Boys I've Loved Before. But despite the initial excitement, Twitter reactions to Sierra Burgess Is A Loser show that people have mixed feelings about the final product.

Though some viewers responded positively to the charming cast and the unexpected female friendship at the story's heart, that wasn't enough to overcome the more uncomfortable aspects of the film. While it could have been refreshing to see a protagonist who didn't fit the mold of traditional teen movies, Sierra's actions crossed the line more than once. At first, Sierra unwittingly catfishes kindhearted jock Jamey when bully Veronica gives him Sierra's number instead of her own. But soon Sierra is engaging in more and more extensive acts of deception to keep Jamey from finding out the truth. She sends him Veronica's selfies, makes Veronica stand in for her during a FaceTime chat, and even sends Veronica on a date with Jamey in her place. That's where viewers began to take issue with the film.

During the date, Jamey not only has no idea he's being lied to about Veronica's identity, he also has no idea that Sierra is spying on them from a short distance away. Then, when Jamey leans in for a kiss, Veronica covers his eyes and waves Sierra over so she can kiss him — without his knowledge or consent. The movie presents this as a romantic moment complete with sweeping music and even jokes about it later when Jamey and Sierra kiss again. "Have we done this before?" he asks her, without anyone expressing any qualms about the lack of consent.

In fact, Sierra never truly apologizes for her actions. In addition to tricking Jamey into a kiss and lying to him constantly, Sierra pretends to be deaf when he first meets her in person. She's afraid that he will recognize her voice from their phone conversations, but instead of trying to alter her voice (say, by changing the pitch) she claims to be deaf, complete with a cringey attempt to fake sign language.

Model and actor Nyle DiMarco, who is deaf, wrote on Twitter that he watched the film because his friend's brother was in it; deaf actor Cochise Zornoza played Jamey's younger brother Ty. DiMarco was excited for the representation, until he saw the scene in which Sierra pretended to be deaf. "I was elated," he wrote before continuing, "Only to find out the deaf character was written and used for a terrible joke. PS— pretending to be deaf is NOT ok."

Then there's Sierra's revenge on Veronica for kissing Jamey late in the film. Though Sierra and Veronica had seemingly become real friends by this point, Sierra decides to broadcast a picture of Veronica making out with a boy to the entire school to humiliate her. She never apologizes or atones for what she did to hurt the people around her; the closest Sierra comes is sharing a song she wrote about being different, which is really very much not the same thing. Everyone forgives her anyway.

Early in the film, Veronica's bullying of Sierra tended to take a transphobic or homophobic slant. She conflated Sierra's supposed unattractiveness with the idea that she must be trans or gay. When one viewer expressed their disappointment with that on Twitter, screenwriter Lindsey Beer messaged her about it. According to Beer, the lines were not meant to come at the expense of the trans community, but make it clear that Veronica was not a good person. User @harryshumsb***h replied that Veronica could have been presented as cruel without targeting the LGBT+ community.

Beer stated that much of the movie came from personal experience and apologized for how it made the user feel. But presenting being trans or gay as a horrible insult is part of the problem, as well as not taking into account the feelings of real people who belong to those communities.

While some viewers found things to enjoy about Sierra Burgess Is A Loser, there were others who did not. Many Twitter users agreed the movie had a lot of potential before it premiered, but it may not have lived up to the hype.

More Like This
The Best Movies Airing On Freeform’s 31 Nights Of Halloween In 2022
Lindsay Lohan Channels Meredith Blake In Her New Christmas Rom-Com
10 Horror Movies With Creepy Kids That Will Scare The $#*% Out Of You
Is 'Hocus Pocus' Too Scary For Kids Under 5?