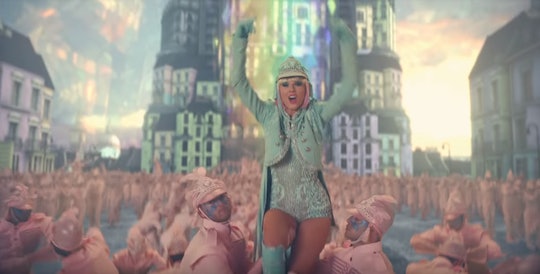 Taylor Swift Just Dropped Her New Video For "ME!" And Twitter Is Here For It

Taylor Swift finally dropped her highly anticipated new single, “ME!” and fans are loving every second of it. In the mesmerizing new music video, which features Panic! At The Disco frontman Brandon Urie, the singer reveals a different side to her. Fans can’t get enough of this new iteration, and these Twitter reactions to Taylor Swift’s “ME!” prove that she’s ushering in a whole new era.

It’s been a long time coming. The singer has been dropping clues about the new single for months, and eager fans have been anxiously decoding every little detail she posts. Now that the single is finally here, fans are taking to Twitter to point out all the Easter eggs in the video, many of which are a throwback to her Reputation album.

Swift officially announced the new track and its accompanying music video on Apr. 26, hours before the single dropped. She made the announcement at at the NFL Draft in Nashville, Tennessee, and when talking to Good Morning America’s Robin Roberts, the singer revealed that her new song is all about honoring your true self and owning it. “‘ME!’ is about embracing your individuality and really celebrating it and owning it,” Swift said. “And, you know, I think that with a pop song we have the ability to get a melody stuck in people’s heads and I just want it to be one that makes them feel better about themselves, not worse.”

The song, which is Swift’s first release with her new record label, Republic Records, is far different from the darker, more aggressive vibe of Reputation. The video is akin to a pastel version of Willy Wonka’s Chocolate Factory, and with its magical colors and happy tone, it feels like a fresh new rebirth for Swift’s brand. Fans shared their excitement for the video on Twitter, with many revealing how happy it’s making them feel.

At the NFL Draft, Swift told Roberts that her fans inspire her to be her best self, and that she truly enjoys leaving clues for them. “The fans are amazing,” she said. “I cannot believe how dedicated they are, how thoughtful. I can’t believe how much they care. So it makes it more fun for me to create music, to create music videos knowing that they’ll care about little Easter eggs or clues or hints. Like, you have no idea how much fun that is to make stuff for people who care about it that much.”

Two of the video’s most obvious Easter Eggs come right at the beginning. First you’ll see a pink version of the snake from Swift’s Reputation album. The snake slithers towards the camera, only to burst into a flurry of colorful butterflies. The second obvious throwback is the staircase, which was covered in snakes in the “Look What You Made Me Do” video, but is now covered in fluffy clouds.

One aspect of the video getting lots of attention from fans is the part in which Swift proclaims, “Hey kids, spelling is fun!” Fans turned the line into a series of hilarious memes:

The new single is a clear indication that fans are headed for a thrilling new ride with the pop star, because a new Taylor has come to the phone.