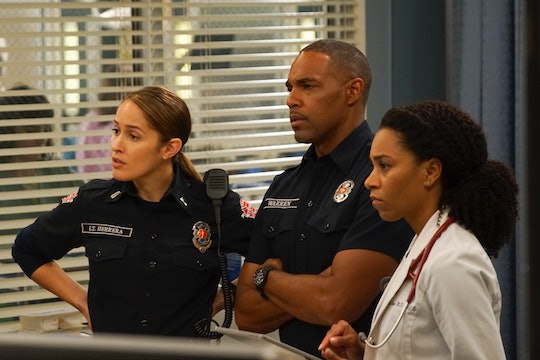 The long-awaited Grey's Anatomy and Station 19 crossover event of the year is finally here, starting with a Grey's episode titled "What I Did For Love" and continuing with "Always Ready" from Station 19. Chief Ripley from the Seattle fire department is rushed to Grey-Sloan after he collapses buying flowers for Vic. Oh, and he might die. And Twitter reactions to the Grey's Anatomy and Station 19 crossover prove that fans are equal parts excited and anxious about what's going to happen. This is frankly a totally understandable reaction. Shondaland is kind of known for taking viewers hearts and wrenching them out of their chests in the worst way possible.

I have two tidbits for Station 19 fans: You'll probably know the fate of Fire Chief Lucas Ripley by the end of the two hours since the fire is at the top of the episode. Also, Maggie treating him, meaning he has a heart issue. I told you these were small details. But at least you know Lucas didn't hit his head — that would be a case for Amelia.

Some fans are excited and nervous about what's to come for the Chief of The Seattle Fire Department:

"There's going to be a crossover between Grey's Anatomy and Station 19 and it makes me like it's going to be tremendous and it's going to get me out of my hair. I can't wait any longer," one user wrote. That was just the start of the anticipation. As the episodes draw closer, the ~feels~ intensify.

It wasn't originally known that the patient in danger was Ripley. And once fans found out they got very emotional.

To pass the time while waiting, other fans mused about some other potential crossover possibilities. One fan, for example, took Taylor Swift's cats names — Meredith and Olivia — as inspiration for a crossover between Grey's Anatomy and Law & Order SVU. Not a bad idea really, once you think about it.

I can't even wrap my mind around that, to be honest. But one fan is definitely prepping themselves for some feels when Grey-Sloan and the Seattle Fire Department meet, writing, "They're going to do the Grey's crossover with station 19 and I can't see a chapter of the firefighters these without crying IMAGINE IF they ADD it to GREY's."

I definitely feel this person's fear — remember what I said about the heart-wrenching thing these shows do? Plus, it is always good to be prepared, because this is not the first crossover between Grey's Anatomy and Station 19 and it probably won't be the last.

So will Maggie be able to save Ripley's life? Will Ripley and Vic finally get to be happy together? Or will everything come crashing down on all these beloved characters in an absolutely spectacular fashion? Who knows! I've survived crossovers like this before, but my only advice is this: screaming at your TV and crying definitely helps. Don't let anyone tell you differently.