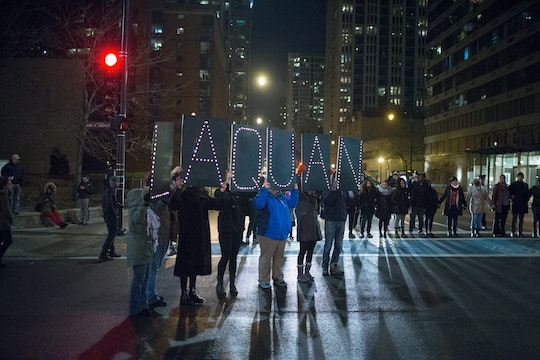 After an investigation that lasted more than a year, Chicago police released the Laquan McDonald shooting video Tuesday evening to much public outcry. Seventeen-year-old McDonald died in Oct. 2014 after being shot 16 times by officer Jason Van Dyke, who was charged Tuesday with first-degree murder and has been denied bail. The video’s release came after months of pressure from activists and public scrutiny and was court-ordered by a judge, who gave police until Wednesday to make the footage public. Following the video’s release, protesters took to the streets of downtown Chicago, chanting "16 shots" and "We've got to fight back."

Both Chicago mayor Rahm Emanuel and McDonald's family asked the public to remain peaceful in the wake of the graphic video’s release. In a statement his family said, “No one understands the anger more than us, but if you choose to speak out, we urge you to be peaceful. Don’t resort to violence in Laquan’s name. Let his legacy be better than that.”

As Mic pointed out Wednesday morning, the public did just that. Along with supporters around the world, Chicago protested Laquan McDonald's death peacefully Tuesday night, making their anger and indignation and fear heard through their words rather than any display of physical force. Since the footage became public, people all around the country and the globe have taken to social media to share their sadness and outrage over the incident — one in a seemingly ever-growing string of killings of young black men by white police officers. Their tweets eloquently capture what many are feeling in the wake of McDonald’s death:

And Are Naturally Feeling Extremely Angry About It

People Everywhere Are Calling For Justice

The release of the Laquan McDonald video reinvigorated what has already sadly become a far-too-common, ongoing debate about police brutality and institutionalized racism. And while the public continues to speak up and protest against the injustice, no one has satisfactorily explained why this keeps happening and why they should have to.