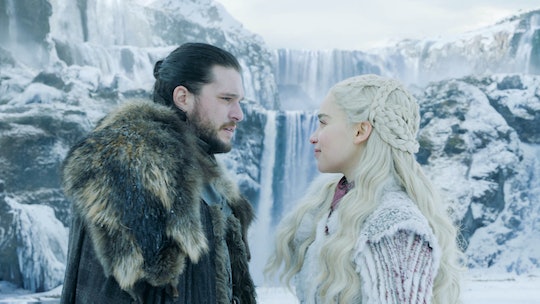 There are some TV shows where it is much easier to skip through the two-minute theme song intro to get to the actual show. But for most Game of Thrones fans, the intro is what gets them ready for another hour (or more) of dragons, sword fighting, and gratuitous nudity. So it was only natural that the final season give viewers a new sequence to study and the Twitter reactions to the new Game of Thrones intro prove that the effort was worth it.

Season 8 started off with the major storylines that were left up in the air at the end of Season 7 and included the fact that winter has arrived in every part of Westeros. The new map in the Game of Thrones intro reflected that with a sheet of snow covering the country from beyond The Wall all the way down to the south. The map itself showed details that fans had never seen in the opening sequence before, like inside the Winterfell crypts and underneath the Red Keep in King’s Landing where there are old dragon skulls. There were even callbacks to important Game of Thrones events like the Red Wedding and The Wall being brought down by the Night King.

There were also less filler shots of locations that apparently won't be brought back this season, like Old Town and Dorne. Instead, the new intro featured the most important places this season where characters are living now and might soon be taken over by the Night King and his army. And Twitter is here for all of these new little details.

Some fans wondered about Game of Thrones’ budget this year with this new and improved intro cost. It had to have taken a lot of time and money to create each little piece of Westeros that was never put on the interactive map before and clearly, the show's budget went into more than just Daenerys’ dragons.

Other fans were pleasantly surprised by the sudden change. With so little details released about Season 8 ahead of the premiere, no one knew that the intro would be so different, but with the monumental final season and the upcoming wars, it was probably the perfect time to change things up.

There’s no doubt that the new Game of Thrones intro has the potential to carry some Season 8 clues too. I’m sure it will take some expert pausing several times over to see every little detail, but I wouldn't put it past some hardcore fans to take a closer look at the new scenes to see if there are any indications of certain characters living or dying this season.

In a way, the new intro is also kind of emotional for longtime Game of Thrones fans. The sudden change was a surprise and it marked the beginning of the end. The show in general typically elicits all kinds of emotions from viewers, so this is nothing new, but you couldn't help but get goosebumps during the entire new intro.

Fans would have probably still been just as excited for the Game of Thrones Season 8 premiere without the new epic intro, but it added something extra and brought up the hype factor a few more notches. Somehow I don't think anyone will be fast forwarding through the new intro during re-watches this season.

Game of Thrones' intro has always been important to fans, but during the final season, it will be interesting to see if it changes at all from episode to episode as different houses are taken out. It will also be interesting to see if the ice that moved through Last Hearth, where the Umbers were annihilated by the Night King and his army, will continue to move toward Winterfell as the season progresses. Either way, Twitter's reaction to the new intro definitely shows that literally anything Game of Thrones related will hype fans up for the final season.