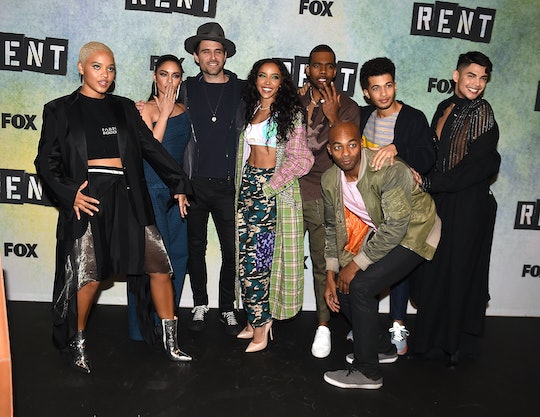 The OG 'Rent' Cast Made A Surprise Appearance On 'Rent: Live'

The love of Rent is strong and that could not have been more apparent during the Sunday night broadcast of Rent: Live on FOX. While this new cast proved that they were incredible, people couldn't help but compare them to the original Broadway cast of Rent — who appeared during the end of the production. The Twitter reactions to the OG Rent cast on Rent: Live proves how strong the fanbase for the musical is.

To say that FOX's broadcast of Rent: Live was unpredictable would be an understatement. Between lead actor, Brennin Hunt, breaking his ankle one day before the broadcast, to the show relying on pre-recorded footage, to the very noisy studio audience, things went a little haywire. And people were definitely taken by surprise by the production.

But the best surprise was definitely saved for last when the cast of the original Broadway performance came out on the stage to perform a reprise of "Seasons of Love" with their modern day counterparts from the show. Everyone — from Idina Menzel to Adam Rapp, from the original Broadway cast — showed up to show their support for the live broadcast and treat the true fans at home.

This was proof as to how impactful the musical has been on so many people out there — whether they love Broadway musicals or just identify with the show. No matter what, this really touched people.

Although a lot of people were displeased with the live staging of the musical, almost everyone could agree that the last five minutes made watching the musical worth it.

After Rent: Live provided so many turns and interesting interpretations of the source material, viewers at home were waiting to get a glimpse at the original musical they knew and loved. And when the original cast came out, this wait was worth it.

Really — the only thing that would have made this live staging better was if the original actors hung out on stage for a little bit longer and sang more than just "Seasons Of Love". But, the show had to go on.

If anything, the excitement expressed over the appearance from the original Broadway cast is a testament to how many lives the musical has touched. The director for Rent: Live, Michael Grief (who also directed an Off-Broadway revival of Rent), explained this to American Theatre:

Over the years, so many people have come up to me to tell me what the musical meant to them. And how it changed and informed who they were, or gave them a sense of belonging or a sense of worthiness. I think we can reach an enormous viewership, and in someway communicate the tenets of Rent — that there is worthiness and dignity in all of humanity, and generosity and forgiveness and learning how to love others in order to receive love yourself. Those are all great themes to be able to share with thousands and thousands of viewers.

Of course, the last time that people saw the original Broadway cast perform on the big screen was in 2005 when Rent was turned into a movie. Although the film didn't necessarily receive rave reviews, it still showed that the musical's message could still be relevant then and is still relevant now, more than 20 years after the musical premiered on Broadway in 1996.

So, this is exactly why people were excited to see that same cast reunite during tonight's broadcast — because Rent fans have been touched by their voices at some point or another in their life. To see the cast reunite in one place for yet another time and watch them sing on stage (and move people to tears) is a testament to how powerful the musical is.