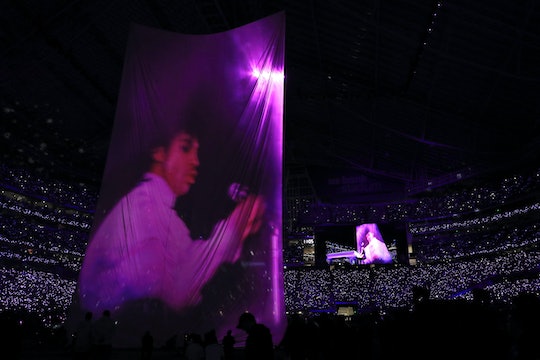 During the weekend leading up to the Super Bowl LII Halftime show, it was reported that Justin Timberlake, the performer, had planned to perform with a hologram of the one, the only, Prince. But after widespread online backlash, Timberlake reportedly changed his plans. Instead, he performed with a "projection" of Prince and, well, Super Bowl viewers still weren't happy. Twitter reactions to the Prince Projection at the halftime show prove that no one does it like The Purple One, so there's no reason to try to emulate his now-gone talent. No, even a projection is a downgrade.

Over the weekend, CBS reported that Timberlake "scrapped" plans to perform with a hologram of Prince, who was born in Minneapolis, MN, and was a long-time Minnesota Vikings fan. Prince died in April 21, 2016, of accidental fentanyl poisoning, and Minnesota (along with the entire music-loving world) mourned the loss of a truly iconic, game-changing musician, singer, and song-writer. So one could see why Timberlake would *assume* a performance with a hologram might be the way to go; honoring The Purple One in his home state during arguably music's biggest performance of the year.

But in a 1998 interview with Guitar World, Prince likened playing with a hologram of a deceased performer to "the most demonic thing imaginable." Prince said: "Everything is as it is, and it should be. If I was meant to jam with Duke Ellington, we would have lived in the same age. That whole virtual reality thing … it really is demonic. And I am not a demon."

So, no: Prince wouldn't have been OK with a hologram of him performing with Timberlake during the Super Bowl LII halftime show. And, honestly, is a projection that much better? Twitter fans didn't seem to think so. Here are just a few tweets highlighting how put-off viewers were:

There's no denying that Minneapolis, and the world, loved Prince. In fact, we all still love him, and miss not only his musical influence, but his inclusive, androgynous, sexual, toxic-masculinity-bashing presence, both on and off the stage. In fact, perhaps the best part of the entire Super Bowl halftime performance was arial coverage of the city of Minneapolis, all lit up in purple. That is how you pay homage to a true icon. That is how you show your respect, without going against the wishes of someone who is no longer here to advocate for himself. That is how you remember a music legend.

What you don't do, arguably, is go against the wishes of a man who has passed away and perform with his likeness. In fact, viewers had other ideas as to how one could have paid homage to Prince without using a projection to do so. Take a look at what Twitter users *wish* Timberlake would have done during the halftime show:

And, of course, you can also go watch and watch Prince's Super Bowl XLI's halftime show, in which the clouds parted, the heavens opened, and it rained while The Purple One sang "Purple Rain." It was 2007, a simpler time, arguably, and the Super Bowl became an after-math of an iconic, forever-remembered Prince performance.

Is any single human being perfect? No. Not even close. Did Timberlake, perhaps, have the best of intentions when attempting to honor Prince in his home state? I think it's safe to say that, yes, he did. But disregarding someone's wishes after they've passed is not a "homage," and Twitter certainly wasn't here for it. So, if you'll excuse me, I am going to spend the next second-half of the game binge-watching Prince performances and remembering this once-in-a-lifetime artist for what he was, is, and always will be: a star.