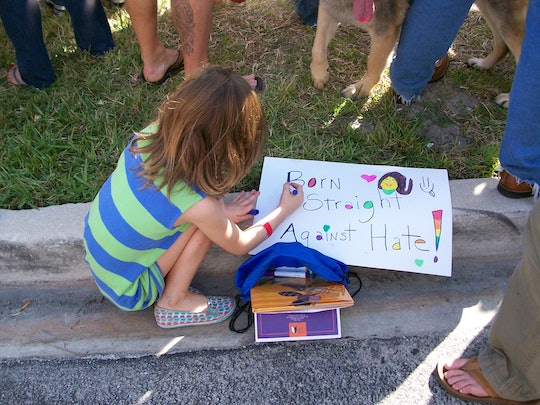 Twitter Reacts To Defeat Of The Houston Nondiscrimination Ordinance

Election day 2015 didn't go so well for the Houston LGBT community. Voters rejected a measure that would have provided general protections for gay and transgender people in the city, and, understandably, Twitter reactions to the Houston nondiscrimination ordinance's defeat came in fast and furious. The measure had gained national attention after a year and a half of embittered battling between supporters and conservative opponents. The conflict spawned everything from legal suits, to protests, to accusations of religious intolerance on one side and LBGT intolerance on the other.

The opponents of the ordinance claim that it infringes on their religious beliefs about homosexuality, but the rallying cry of their campaign focused on one part of the ordinance that would allow transgender men and women in public restrooms. They argued that it would make way for sexual predators to enter women’s restrooms as well. Houston Mayor Annise Parker, who is gay and a Democrat, called this “bathroom ordinance” an irrational scare tactic. Unfortunately, it worked.

Among the more high-profile supporters of the referendum were the White House, Apple, and Hillary Clinton. The opposing side was spearheaded by Campaign for Houston, which is made up of both area pastors and local and state officials. On Monday, before the results were in, Republican Texas Gov. Greg Abbott tweeted, “HOUSTON: Vote Texas values, not @HillaryClinton values. Vote NO on City of Houston Proposition 1. No men in women's bathrooms.” Here are more reactions from both sides:

Now that the ordinance is being discussed by more high profile politicians connected to the 2016 presidential campaign, it’s conceivable that there will be similar conflicts in other cities, no doubt spurred on by GOP leaders. LGBT groups are using this case to prepare for the future, and the major takeaway for any LGBT or democratic supporters is to go out and vote, always, no matter how local the issue.