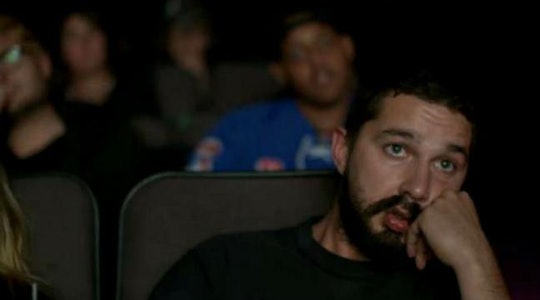 Twitter Reacts To Shia LaBeouf Livestreaming His Own Films, & It's More Entertaining Than You Can Imagine

One of the best things about social media is its ability to connect you with your favorite celebs with a simple keystroke. Whether they’re promoting something or want to reach out to their fans, celebrities definitely feel closer to us than ever before. But a certain Transformers star is going above and beyond to be accessible to the people of The Internet. Yesterday, Shia LaBeouf livestreamed himself watching all his movies as part of an art project called #AllMyMovies and while some of us are left scratching our heads, The Internet is loving it. (And if you are too embarrassed to ask, yes, you can watch him too.)

Looking at recent headlines, it is refreshing to see something positive (albeit, kinda weird) about LaBeouf. In early October, the actor was reportedly arrested again — a month after he agreed to a plea deal that he would stay out of trouble for a previous charge. This time, it was in Texas for alleged public intoxication — reports claim the actor was belligerent and drunkenly ran from police. And that previous charge stemmed from the June 2014 Cabaret meltdown that was hard to forget. (LaBeouf talked about the moment to Jimmy Kimmel on Jimmy Kimmel LIVE!, telling the host that he had drank whisky prior to heading to the show.)

But, after a tumultuous year, it looks like LaBeouf is turning over. Planted in a chair at New York City’s Angelika Film Center, he is watching 27 movies that he has appeared in. For three days, Shia will be all about Shia, and will watch films he’s appeared in, including Holes (number 23 on the list), Eagle Eye (number 10), and even Dumb and Dumberer: When Harry Met Lloyd (number 22). While some lucky souls are at the Soho theater taking this “journey” with him, we will have to settle with watching him watch his flicks. (I know, confusing.)

And though this form of performance art (some of us are still deciding what it is) is not something you see every day, quickly browsing the #AllMyMovies hashtag on Twitter, it is clear some people are loving it. After seeing the Twittersphere’s take on the LaBeouf Livestream, we’re quickly being sold on this whole thing.