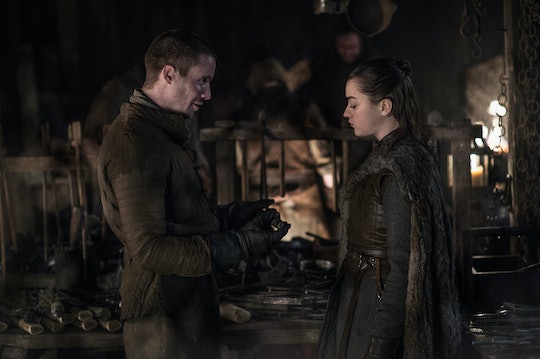 When Arya and Gendry reunited in the first episode of Game of Thrones Season 8, it was clear their relationship had evolved. That became even more obvious in Episode 2, as their flirting in the forge intensified to molten levels (I'm sorry). And fans were all about it. Twitter ships Arya and Gendry hard, and it's easy to see why.

Look, there's no getting around the fact that shipping Arya and Gendry is a little complicated. The actors have a pretty clear age gap even if the characters aren't supposed to; Maisie Williams is 22 years old to Joe Dempsie's 31, but according to Nerdist their characters are only five years apart in age in George R. R. Martin's A Song of Ice and Fire books. Plus, Arya was still just a kid when they were first on the road together. Despite that, their dynamic always drew shippers — even if it also resulted in debates like the one on the ASOIAF forums entitled: "Shipping Arya and Gendry: Creepy or Not?"

It looks like most Twitter fans have firmly decided that it is not, or at least not anymore. And that may be because something was undeniably happening between Arya and Gendry in Season 8.

When Arya reintroduced herself to Gendry in Episode 1, she did it with her typical verve. She swanned into the forge and defended his honor against the Hound before demanding a very special weapon. It was something like a spear, tipped in dragonglass, that may come apart in the middle. She and Gendry very much got their flirt on throughout the short scene, though things leveled up in Episode 2. Like, in a real serious way.

Though she couldn't have given Gendry much time to work on it, Arya wanted to know what was taking so long with her shiny new weapon. That necessitated another visit to the forge, but this one felt different, in that her obvious thirst for Gendry was operating at parody levels. Did you want to see Joe Dempsie silhouetted in smoke, pouring boiling metal in molds and swinging axes like it ain't no thing? If so, congratulations. Both you and Arya got exactly what you were looking for.

But all that flirting was just a prelude. Later, Gendry lurked in the shadows to do his own thirsting over Arya's archery skills before presenting her with the finished spear. The conversation pivoted quickly from matters of business to something much more personal. Arya wanted to know what Melisandre did with Gendry (short version: questionable kinky witchcraft), which led to a question about what else Gendry got up to in their time apart. Any ex-girlfriends Arya should know about? Asking for a friend.

Gendry fumbled and stuttered his way through admitting to having been with three women. At that point, Arya informed him that they were probably going to die soon and before that happened, she wanted to know "what it's like." Cue smooching. And then Arya pushing Gendry onto the nearest flat surface.

Arya and Gendry getting together was certainly a surprise, but it makes sense that she'd want to take advantage of something good before the world goes spectacularly to pieces again. After everything Arya has been through, she deserves at least that much. And from the overjoyed reactions on Twitter, it seems like fans were thrilled to have a respite from everything being so relentlessly grim, too.