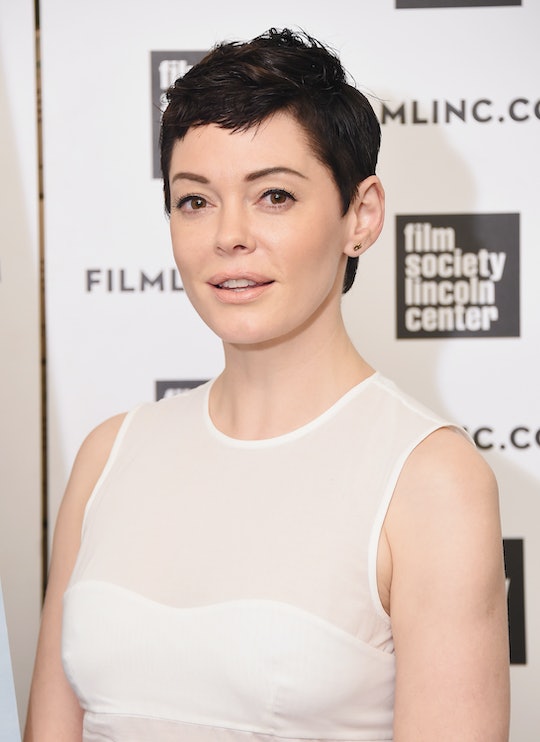 In the wake of both The New York Times and The New Yorker's explosive reports alleging Hollywood mogul Harvey Weinstein of multiple accounts of sexual harassment and assault, 44-year-old actress Rose McGowan has been one of the most outspoken critics of Weinstein — especially on Twitter — since the story broke last week. But late Wednesday night, Twitter suspended Rose McGowan's account, and the #RoseArmy is not having it.

Update: Twitter responded to reports of McGowan's suspension on Thursday afternoon with the following thread:

Previously: Some context for those who aren't up to speed: The Times story revealed that McGowan was paid a $100,000 settlement by Weinstein after "an episode in a hotel room" at the 1997 Sundance Film Festival — a scenario in line with several disturbing reports from other actresses and models who were allegedly assaulted by Weinstein. While representatives for Weinstein have not returned Romper's requests for comment, a spokesperson for Weinstein told The New Yorker, "Any allegations of non-consensual sex are unequivocally denied by Mr. Weinstein."

According to Twitter's Help Center, the Twitter Rules stipulate that accounts can be suspended for a number of reasons, from users posting spam to unlawful content. A large section of rules is dedicated to "Abusive Behavior" — and many believe that McGowan's tweet telling actor Ben Affleck to "f*ck off" in the context of the Weinstein scandal may have been the tipping point for Twitter.

It is unclear whether Twitter admins decided to suspend McGowan's account or if it was simply an automated action after a threshold is met based on a certain number of users reporting her tweets — Twitter won't explain why McGowan was suspended, much to Hollywood's condemnation. Representatives for Twitter did not immediately respond to Romper's request for comment.

Fans of McGowan, advocates for sexual assault victims and survivors, and free speech advocates have all exploded in outrage on Twitter over the seemingly inconsistent approach to enforcing the "Twitter Rules" for account suspensions.

According to McGowan's own Instagram post, her Twitter account privileges were suspended for approximately 12 hours. Her post also indicated that if she removed the offending tweets, she could regain Twitter privileges sooner. Here's the gem of "you can't make this stuff up" to the whole situation: When Twitter suspends your account, it doesn't tell you exactly what tweets triggered the suspension, so neither McGowan nor any of her followers have any way of knowing which tweets violated Twitter Rules. Whether McGowan's Twitter suspension was automatically triggered by reports or otherwise, the message is especially chilling to victims and survivors of sexual assault: Speak out and risk getting silenced.

An equally chilling message is also reinforced by McGowan's temporary Twitter suspension: As the reports about Weinstein's alleged sexual harassment and assaults have revealed, his purported offenses were likely enabled and covered up within the entertainment industry for decades. As much of a tinfoil conspiracy theory as it may seem — that the unidentified but ever-looming "THEY" not only allowed this to happen, but actively worked to cover it up over the years — it is only given more credence when Twitter suspends the account of one of Weinstein's most outspoken critics. It feeds into allegations of the systematic silencing of anyone who would seek to speak out about Weinstein's alleged offenses.

Given the amount of truly awful, vitriolic, and downright threatening messages posted to Twitter — many of them tweeted by America's very own Commander in Chief — it seems hypocritical for Twitter to selectively suspend the account of one of the most prominent social media voices out there shedding light and speaking out for the victims in the Weinstein scandal.