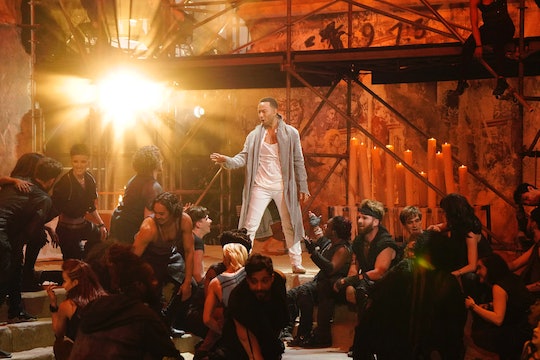 It first functioned as a concept album imagining the the last days of Jesus Christ, per the accounts of him in the Gospels. But when the show debuted on Broadway a year later, it was something of a commercial flop. A film adaptation was made in 1973, which garnered several Golden Globe nominations. Since then, the show has been relegated to the realm of cult classic. For reference, Godspell, a folk musical also based on the four Gospels, opened in 1971 off-Broadway, with a successful revival run in 2011.

Since both Jesus Christ Superstar and Rent are rock operas, it makes sense that the staging feels similar. For example, they both used long tables to showcase the ensemble of performers in group numbers. This is an iconic way of staging the Act I finale of Rent, "La Vie Boheme," and in the case of Jesus Christ Superstar Live, it functioned as an instantly recognizable staging of The Last Supper.

For the sets, production designer Jason Ardizzone-West created "ancient, damaged fragments of a chapel" held up by scaffolding. All scenes take place in a common gathering place at the center of the stage, and props are few — just raw wood table pieces that can be assembled and disassembled as the chorus or players may need them. "The challenge of designing this space is you have to come up with something that works for live concerts and opera," says Ardizzone-West, "but also has elements that work for an intimate narrative scene."

The 44-person cast of Jesus Christ Superstar Live! and onstage orchestra of 32 musicians all adopted an alt-rock/glam rock/goth rock aesthetic to unify themselves into a cohesive production, which also mimicked the ensemble numbers in Rent. Paul Tazewell, who designed the costumes for 2016's The Wiz! Live and won an Emmy for it, designed the costumes for this production as well.

He noted in an interview with Variety that the in-house audience would also play a part in the festivities, since performers were set to interact with them from time to time. Because most members of the cast are singers, versus traditional musical theater performers, it makes sense that they would interact with the audience. Some of Twitter found this distracting, and critiqued the production for its informal style. But if you think about who was cast in the live telecast — John Legend, Sara Bareilles, and Alice Cooper among them — it's understandable why the production adopted a concert-style setting, similar to other rock musicals on Broadway. Rent is infamous for casting A-list singers during its long Broadway run, and, given Jesus Christ Superstar Live's comparable vibe, it's no surprise that the two shows felt so alike to fans.