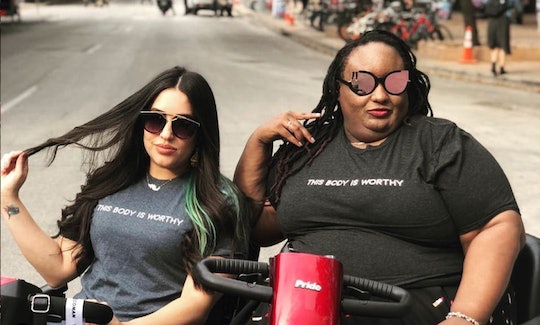 #AbledsAreWeird Shines A Light On Things Said To People With Disabilities

A viral Twitter hashtag created by writer and advocate Imani Barbarin seeks to uncover the stereotypes and harassment that people with disabilities face. The trending hashtag #AbledsAreWeird shines a light on the uncomfortable experiences non-disabled individuals create for people with disabilities and serves as a reality check. From invasions of privacy in bathroom stalls to unwanted physical contact and outright disrespect, people are sharing how ableist behavior takes a negative toll on their daily lives.

Barbarin, who advocates for the "representation, inclusion, and empowerment of disabled people at the intersections of race and feminism both in the United States and globally," tells Romper that she created the hashtag after experiencing bizarre interactions herself.

In her original tweet on March 15, Barbarin described an experience with an abled person who threw her crutch into a pool in an attempt "to help [her] swim."

"When it comes to disability, ableds tend to lose all sense of common sense and instead act in ways that are completely strange and at times dangerous," she tells Romper. "This isn’t the behavior that they would [display] around other abled people, so why would they do it with us?"

The viral hashtag also brings to light the importance of consent that often goes ignored by abled individuals. "Many of the stories shared were about consent of disabled bodies either being outright violated or not asked for in the first place," Barbarin says. "Following someone into the bathroom or grabbing them without their permission, even if you’re justification is to 'help' us, is in violation of our right to dictate what we want for ourselves."

Barbarin points to adapting the social model of disability rather than the widely criticized medical model of disability, which is often cited as the foundation of ablest behavior. The former approach, which can be traced back to the 1960s, identifies structural barriers, negative attitudes, and purposeful or inadvertent societal exclusion as the main causes of disabling people rather than the physical body (which is a main focus of the medical model), according to the Center for Disability Studies at the University of Leeds in the UK. "In our view it is society which disables physically impaired people. Disability is something imposed on top of our impairments by the way we are unnecessarily isolated and excluded from full participation in society," the UK organization Union of the Physically Impaired Against Segregation wrote in 1975.

Now, Barbarin hopes that allies listen to and amplify within their own circles how societal behavior can "be strange and sometimes damaging." Not only do misled societal views create uncomfortable and dangerous spaces for people with disabilities, but they often influence different levels of policy, from state and federal to the workplace. The hashtag highlights a need for society to reflect on and adjust misconceptions and behaviors, rather than rely on what they might think are good intentions.

"I hope non-disabled people recognize the microagressions they often employ to marginalize disabled people,” Barbarin tells Romper. "I want them to be as uncomfortable as disabled people facing this behavior often are. Maybe that will lead them to change."