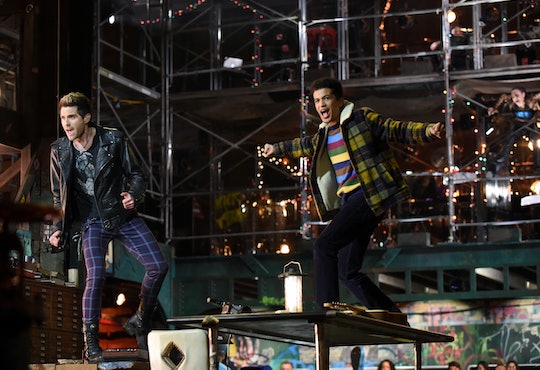 There was a lot that went wrong during Fox's production of Rent: Live on Sunday night. The show was performed in front of a live audience in a huge studio, making it look like a huge rock concert. But people watching at home weren't too happy about it. Seriously, Twitter's annoyed with the Rent: Live audience noise — and they kind of have a point.

Rent: Live was supposed to be performed in front of a live audience and viewers at home on Sunday evening. But there was a slight change of plans. During dress rehearsals on Saturday, actor Brennin Hunt, who played Roger, broke his foot, according to E! News. This forced Fox to air a version of Rent: Live from dress rehearsal that previous day. Even without this super live element, the audience still made it seem like the musical was still performed live in some capacity.

Some people even thought that the show's sound mixers were to blame — not the audience members themselves.

Others were just plain distracted from all of the distractions taking away from the actors and the music.

But one Twitter user who had been in the audience revealed that they were told to make noise. Interesting.

Playwright, Kristoffer Diaz, who was hired to adapt the musical from the 1990's to live TV told American Theatre:

Sure, some people could say that the audience's noise took away from the intimacy of such a topical show. But at the end of the day, it was a super fitting addition. You could sense how grand the show was with the audience there, and their involvement only enhanced the nature of the very epic performance.