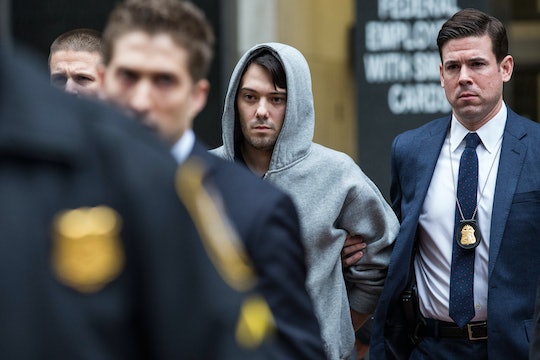 Martin Shkreli may actually be the most hated man on the internet. The 32-year-old CEO of Turin Pharmaceuticals became a household name in September of this year when it was revealed that he hiked the price of a potentially life-saving drug more than 5000 percent. Shkreli’s decision made him the subject of scorn and derision from pretty much everyone on the planet. So it’s probably no wonder that when Martin Shkreli was arrested on unrelated securities fraud charges on Thursday, Twitter went absolutely giddy.

Martin Shkreli has been called the “new face of American greed,” according to Salon. In September, he bragged about raising the price of a drug used to control toxoplasmosis infections in unborn babies and patients with cancer or AIDS by more than 5,000 percent. The “pharma bro” has been called a “brat” by Donald Trump and was turned down as a donor to the Bernie Sanders campaign.

Amidst outcry from the general public — and a promise from Democratic candidate Hillary Clinton to make drug price-gouging a high-profile issue for her campaign — Shkreli finally relented and promised to return the price of Daraprim to its original $13.50, even though he continued to insist the drug was still underpriced at $750 per dose. Shkreli later reneged on that promise, officially sealing his status as a real life comic book villain.

After his arrest Thursday, Twitter erupted with praise, proving that people at least feel that some sort of moral justice was served, even if Shkreli has yet to be convicted for securities fraud.

A few people used Shkreli’s pricing logic against him:

Others felt kind of guilty for their schadenfreude, but not for long.

This one is a fitting homage to Shkreli's love of hip hop.

Shkreli recently spent millions on the only remaining copy of a Wu-Tang Clan album that fans would love to hear, though Shkreli said he had no immediate plans to listen to it, according to Bloomberg. Twitter users were especially happy and bitter after his arrest.

Though some Twitter users still pointed out that public hate for Shkreli doesn't at all result from the fraud charges. Shkreli is entitled to his day in court and, like this user pointed out, it might be wise to reserve judgement...or not.