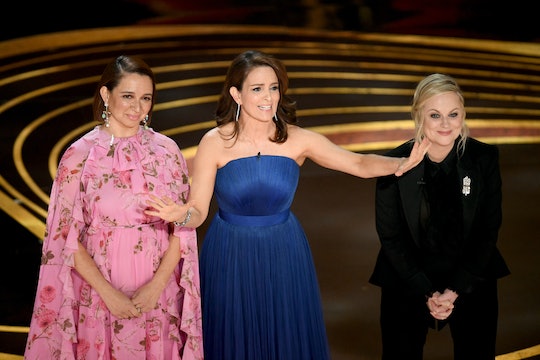 Here's What Twitter Had To Say About The Hostless Academy Awards

To say it's been a tense race for this year's plum Oscars hosting gig would be an understatement. In the end, after a history of homophobic jokes resulted in the original host Kevin Hart losing the gig, the Academy decided to go hostless this year. It was probably the best decision to make under the circumstances, but it was not without controversy. Twitter's reaction to the lack of an Oscars host this year was predictably hilarious. From the Academy's decision to jam in a bunch of musical performances to wondering why some of the telecast's talented presenters didn't just take over hosting duties, Twitter came prepared with ~fire~ jokes.

Instead of a single dedicated celeb poised to take viewers through the show, the Academy opted for a series of A-list presenters, broken up by musical numbers and skits from the actors in the nominated films, according to Variety. An awards show producer speaking on condition of anonymity told the outlet that they weren't concerned about the decision to scrap a host altogether. "When you make these shows, you are beholden to the race," the producer told Variety. "If it’s a great race, it’s a great show. If it’s not a great show, you’re hanging a lot on that host and they’re not going to save you. They’ll give a few good moments."

The outlet also noted that the Academy Awards has only gone hostless once before, in 1989, and that was considered a disaster, as The Wrap noted, thanks mostly to a rough opening musical number starring Rob Lowe. But the Academy has featured multiple hosts splitting the gig several times before, which seems to go marginally better.

Before the ceremony was even underway, one tweet sparked endless conspiracy theorizing that a secret host was actually in the mix. Some believed that Whoopi Goldberg — the first woman to solo host the Oscars in 1994, who went on to reprise the role in 1996, 1999 and 2002 — was on deck to be the surprise host for the telecast this year. Goldberg has been out sick with pneumonia from her regular hosting duties at The View since Feb. 4, according to People, which prompted some to speculate that she was actually in covert rehearsals to helm the ceremony. (According to The Guardian, others pointed out that she had been coughing a lot in recent tapings and her co-host, Abby Huntsman, is pregnant, which supports the pneumonia report.)

For her part, Goldberg was skeptical that a ceremony without a host could work, which she was very vocal about. "If you want to go hostless, that’s your prerogative. I think it’s a dumb idea," she said on The View, as reported in the article in The Guardian. "People need someone to take them through things. I think it needs to be somebody who loves the films."

Alas, The Goldberg Conspiracy (official name) turned out to be a hoax. The legendary comedienne stuck to her presenting duties and the Academy made good on its promise to feature a variety of hosts. And, of course, some of the presenters were genuinely hilarious! Melissa McCarthy and Brian Tyree Henry's The Favourite bit, complete with bunny puppets, had the audience in stitches. Plenty of people actually took to Twitter in praise of the hostless format.

Improving the flow of any awards show is an impressive feat, and it seems like people are responding well to this massive shift in format. Could it be around to stay? It might be an experiment worth repeating.