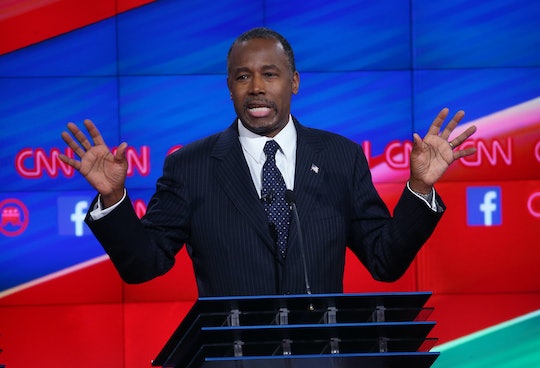 Here's a campaign shakeup: two of Ben Carson's top aides quit, according to NBC News. Could this mean that Carson is going to drop out? It's unclear, but NBC News reported that the change is a sign that the candidate "is struggling."

Carson lost his campaign manager, Barry Bennett, and his Communications Director, Doug Watts. Watts said that the two "respect" Carson and that they've seen many successes as members of his team, according to ABC:

Having just announced raising $23m for the 4th Q, more than any other Republican candidate, and passing 1 million contributions and and over 600k unique donors since March, we are proud of our efforts for Dr. Carson and we wish him and his campaign the best of luck.

Though the personnel change seems like the kind of development that would be disconcerting to any candidate, it's possible that Carson knew this was coming (and may have been planning for it). According to The New York Times, the neurosurgeon advisor is radio personality Armstrong Williams. Bennett and Watts didn't agree with Williams on the direction of the campaign, causing friction that may have prompted the resignations, according to the Times.

Bennett later disclosed to ABC that he did not support Carson's decision to change his communications director, Watts. He also implied that Williams was his reason for leaving and was the cause behind "problems" in the campaign:

[Carson] tried to blame some of the problems in the campaign on silly things and I said Ben we all know the root of our problems, let’s not pretend it’s not Armstrong Williams. Ben said I’ll talk to him, I’ll talk to him. But I’ve heard that for nine months now.

Williams did not immediately respond to Romper's request for comment.

Bennett has a long history of success in Washington. An October profile by The Huffington Post described Bennett's desire to harness technology and the power of personal connection to bolster Carson's campaign. He championed an algorithm that allows a single person to field 9,000 questions daily, encouraged supporters to photograph themselves holding signs explaining why they'll vote for Carson, and allowed fans to secure spots for their kids' name on the outside of Carson's bus (for a donation), according to the Huffington Post. From doing data entry for Ronald Reagan to producing a documentary attacking Mitt Romney, Bennett's diverse experience in politics positioned him to help Carson connect with his audience.

A Politico report indicated that Watts worked for the same Reagan campaign as Bennett in 1984, though he was the advertising director. He had a presence in Republican politics in California, made a move to the private sector, and surprisingly gave "more than $5,000 to Democratic candidates at the state and federal level over the past decade" without giving to national Republicans.

Bennett and Watts helped Carson run damage control after a campaign filled with unexpected challenges. Even though Carson has held his own in recent months as a Republican frontrunner, he's made enough controversial statements to yield a list from NBC News. Mentioned in the piece: Carson's position that "being gay is a choice," his admission that he would not want a Muslim as commander-in-chief of the U.S., and his belief that an increase in the number of weapons available to civilians may have prevented the Holocaust. Recent accusations that Carson lied about his past compounded a track record of gaffes.

It seems as though Williams' vision for Carson's campaign didn't align with Bennett and Watts' strategies for moving forward. But with the first Republican primary approaching, Carson will have to regroup quickly in order to stay in the race. He's got the funding to do it, but he'll need direction, and it's unclear where that direction will come from.