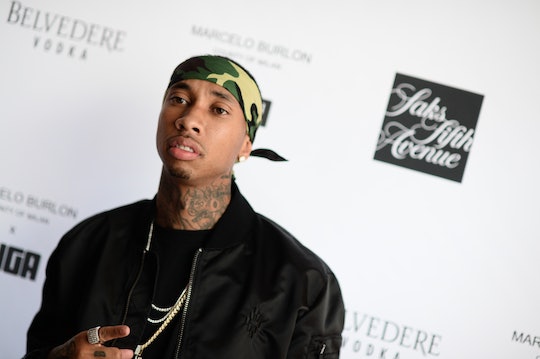 Tyga May Have Responded To Kylie Jenner's Pregnancy, & It's Driving The Internet Mad

Since almost breaking the internet with reports of her first pregnancy, Kylie Jenner has been on everyone's minds. Speculation about the father and surrounding circumstances has had some wondering if ex-boyfriend Tyga was involved. And while unnamed sources have confirmed that rapper Travis Scott is the 20-year-old reality star's new beau and father of her baby, a snap that appeared to be Tyga's response to Jenner's pregnancy seemingly claimed that he was the father. But, after getting hunted down by the paparazzi, he seems to have debunked the origin of that mysterious post.

People confirmed rumors of Jenner's pregnancy on Friday, citing numerous unnamed sources close to the couple. (Romper has reached out to representatives for both Jenner and Scott, but has not heard back at this time.) The makeup mogul and 25-year-old boyfriend are reportedly expecting a baby girl in February of next year, as TMZ first reported. And friends and family are reportedly "overjoyed" for the two of them, according to People.

Ignoring her seemingly flourishing relationship with Scott, some fans still believed that she could be having a child with her ex, Tyga. These rumors were likely fueled by a Snapchat post that people believed Tyga posted following the news. The snap in question was an image of Jenner with a headline that read "Kylie Jenner is pregnant, TMZ reports." Over top of the actual headline, the caption read, "Hell nah thats [sic] my kid," along with four purple smiling devil emoji.

However, in a video of a TMZ paparazzo questioning him a day later, Tyga appeared calm and collected when confronted with reports about Jenner's pregnancy. In fact, he seems entirely disinterested in the story altogether. And in this same video, Tyga is also questioned about the Snapchat post that has so many fans confused. If you take him at his word, the post was a fake and people need to calm down.

Still, despite this reaction and his seemingly debunking of the tweet in question, people are still heavily invested in this plot twist:

Tyga's apparent nonchalance is more understandable when you take into consideration that he, too, seems to have moved on from his past relationship with Jenner. People recently reported that he is now seeing Kim Kardashian look-alike Kamilla Osman and the two are "full on dating."'

According to People, Scott and Jenner became romantically linked earlier this year following her split from Tyga in April. "Kylie broke up with Tyga partly because she felt too young to get serious," an insider told the magazine on what happened between Jenner and Tyga. "Now she’s having a baby with a guy she just started dating."

The source continued, "People around her are really surprised. It happened really fast, but for Kylie, being with Travis is so different than anyone else. She’s so in love with him. She’s really excited."

Despite their brief time together, both Scott and Jenner are reportedly excited to be expecting a child together. And, according to People, Jenner's family has reportedly given her their stamp of approval when it comes to her relationship with Scott. A source told People that her family "loves Travis" and the two of them are doing well together:

Kylie and Travis are doing great. There’s no drama with Travis. He’s a cool guy. He treats Kylie with a lot of respect and love. Kylie is very happy.

With all the love going around in the Kardashian-Jenner household, it's safe to say that there is little time to worry about the now-infamous snap and the resulting speculation. In the end, what really matters aren't the rumors, it's the family awaiting the arrival of this little girl — and it seems that the whole Kardashian clan is more than ready to meet her.