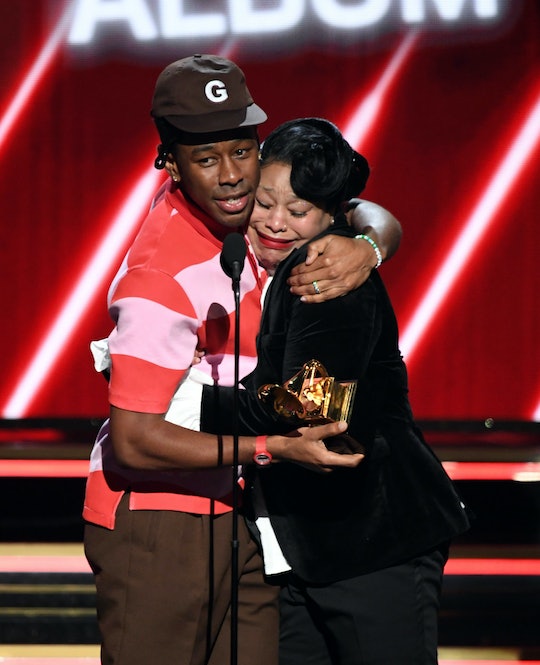 Tyler The Creator Calls Mom "Dog" & Brings Her On Stage

When it comes to award acceptance speeches, many celebs thank their parents, but few bring their parents on stage with them. Doing just that, Tyler, the Creator's mom went on stage with him at the Grammys where he thanked her for helping him to become the person he is today. Suffice it to say, mom was a bit emotional during it all (so was I, TBH).

Tyler, the Creator was nominated for and won the category of Best Rap Album for his album Igor, marking his third time being nominated but only his first win. For such a momentous occasion, the artist brought his entire support system along for the ride, not least of all his mom. "That's my mom, if y'all wondering," Tyler explained to the crowd before wrapping his arm around her. "Mom, I gotta say my speech, dawg."

He went on to include her in his list of essential supporters. "Hello, hi, so I don’t know if I'm gonna be up here again, so bear with me," he said, before thanking his mom for doing a "great job" raising him. Other thanks went to his managers for taking "a seed and watering it," his friends and family members for "trusting my ideas and putting up with my annoying, hyperactive energy," and his label for "trusting my crazy ideas."

Along with accepting his award, Tyler also performed during the Grammys, treating the crowd to a theatrical performance of his songs “Earfquake” and “New Magic Wand” alongside Charlie Wilson and Boyz II Men as his mom, number one dawg, watched on.